Frederick Douglass (c. 1818-1895), the most famous African American of the 19th century, has been in the news lately because his statue is to be added to or near Statuary Hall in the Capitol Building to represent the District of Columbia. It's a notable and long overdue recognition for both Douglass and the District.

Douglass, as is well known, was born a slave in Talbot County, Maryland, escaped as a young man in 1838, and fled to New York, where he became passionately involved in the abolitionist movement. When his Narrative of the Life of Frederick Douglass, an American Slave was published in 1845 it became a bestseller. White people marveled that a black man and former slave could write so eloquently, and they were even more astonished when they heard him speak. Douglass became a powerful civil rights advocate and the embodiment of all that African Americans could achieve in the face of truly daunting adversity.


But how does the District fit in to this picture? Scholars have largely focused on Douglass' early abolitionist years, but in later life, once he was famous and successful, he moved to the District and became a prominent city official, settling in to a charming 21-room country house atop a hill in Anacostia with a commanding view of the city. John Muller, a journalist and native Washingtonian, has meticulously researched the great man's comings and goings in our fair city and collects his insights in his new book, Frederick Douglass in Washington, D.C.: The Lion of Anacostia. 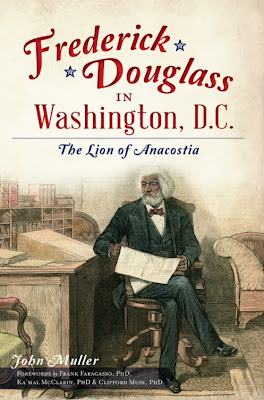 Muller assumes that his readers know who Douglass was and, after a quick glimpse of his childhood, jumps quickly into the whirlwind of his life in D.C. Douglass visited Washington during the Civil War to advise President Lincoln on the enlistment of black soldiers in the Union Army but did not settle here until 1872, following a fire that destroyed his house in Rochester, New York. Originally living in a spacious townhouse on Capitol Hill, Douglass acquired his mansion in Anacostia, called Cedar Hill, in 1877.

By that time, he was much embroiled in the city's Reconstruction-era politics. Muller provides a wealth of information about several pivotal moments, including his near election in 1871—even before he had moved to the city—as a non-voting delegate to Congress and his subsequent brief appointment as a member of the legislative council of what was then the Territory of Columbia. Douglass' prominence was due not just to his lectures and writings but to the newspaper he helmed, the New National Era, which had begun publication in 1870. Douglass by this time was an experienced newspaperman and he foresaw the financial challenge of starting up a newspaper for blacks in Reconstruction times, and, in fact, the New National Era lasted only a few years. Nevertheless it left an important mark on the city and on African American journalism in the years to come.

Though he lost money on the newspaper venture, Douglass had plenty of other irons in the fire, including his appointment by President Hayes as U.S. marshal for the District of Columbia. Muller points out the irony of this position, given that Douglass had spent much of his early life evading the law, first as a fugitive slave and later as a conductor on the Underground Railroad. Though his appointment was opposed by conservative Democrats, Douglass was confirmed by the Senate and served from 1877 to 1881, a tumultuous time for race relations in the nation's capital. Douglass subsequently also served as the D.C. Recorder of Deeds for several years.

Douglass was in great demand for speaking engagements in addition to his official duties and had other important commitments as well, including serving as the last president of the federally-chartered Freedman's Savings Bank, which closed in 1874. Despite his many commitments, Douglass was also on the Board of Trustees of Howard University, an institution he staunchly supported.

Equally important as his many public commitments was his family life in old Anacostia, then known as Uniontown. Muller fills in telling details about this thriving little community on the other side of the Anacostia River from the Navy Yard. Clearly the most tumultuous event to occur in Douglass' life on Cedar Hill was the death of his wife, Anna Murray Douglass, in 1882. The loss for Douglass was heart-breaking, but two years later he married Helen Pitts, a white woman who had been his secretary when he was recorder of deeds. Muller describes how family, friends, and others in the black community were offended by this move, but the bonds of affection between Douglass and Pitts seem to have been genuine. The two were together until Douglass passed away 11 years later.

They called him the Sage of Anacostia. He was a celebrity, well off and widely respected. Yet Douglass's story during his Washington DC years is one of ambivalence about his prominence, even occasional discomfort. There's no doubt that he sought positions of influence and, as Muller points out, was sometimes criticized for his political ambitions. Yet he was prone to doubting his own abilities—or maybe he just wanted to avoid being drawn too far into the system. He turned down an opportunity to run for the U.S. Senate, as he did an offer of the presidency of Howard University. How could a man who never had any formal education be president of a university, he reasoned. It's also striking to see his apparent perplexity about the backlash over his marriage to Helen Pitts. —Had he not realized that his life was no longer his own at that point, that he was obliged to embrace the constraints of his public image rather than make his own personal choices? For a man who had so famously overcome slavery, the subtler bonds of his successful later years must have presented very real challenges of a different sort.

Cedar Hill is now a National Historic Site administered by the National Park Service, and it is well worth a visit. John Muller's book, published by History Press, will be available on October 2.