In addition to the big hotels like the Willard and the Arlington, smaller boutique hotels were very popular among the rich and powerful in late 19th-century Washington, both as places to stay and for their elegant dining rooms. One of the most notable of these was run by James Wormley (1819-1884), an African American who was truly an exceptional individual in the city's history. Wormley had an unusual dexterity in navigating the disconnected worlds of whites and blacks in 19th century Washington. He opened his first catering business in the 1500 block of I Street NW in the 1850s and rapidly became very successful. The English writer Anthony Trollope stayed at Wormley’s in 1861 and offered these observations on Wormley’s skills as a host:


I put up at one of the lodging houses of Mr. Wormley, a colored man, in H Street, to whose attention I can recommend any Englishman who may chance to want quarters in Washington…. My landlord told me that he was sorry I was going. Would I not remain? Would I come back to him? Had I been comfortable? Only for so and so or so and so, he would have done better for me. No white American citizen, occupying the position of landlord, would have condescended to such confortable words. I knew the man did not in truth want me to stay, as a lady and gentleman were waiting to go in the moment I went out, but I did not the less value the assurance.

Wormley’s growing reputation soon gained him a spot as the head steward of the Metropolitan Club on nearby Lafayette Square, where he attracted the attention of wealthy statesman Reverdy Johnson (1796-1876). When Johnson was named minister to England in 1868, he chose Wormley to accompany him overseas as his personal chef. Wormley brought live terrapins with him on the transatlantic voyage and greatly impressed the British with his delicious terrapin stew. It was on the heels of this triumph that Wormley returned to Washington to open a five-story hotel and restaurant on the southwest corner of 15th and H Streets NW in 1871.

Wormley was widely celebrated as a sophisticated caterer and restaurateur, and his hostelry was frequented by the rich and powerful. In later years the Evening Star called him “one of the most widely known stewards and hotel proprietors in the country.” The Boston Herald observed that his hotel “while not the largest, was the most strictly aristocratic of any in the city, its quiet elegance and high prices attracting a very select circle of patronage.”

Wormley opened his hotel at 15th and H at about the same time as John Welcker’s elegant hotel was started just down the street. After New York impresario John Chamberlin opened his own establishment a block to the north in 1880, this stretch of 15th Street, so close to the White House and the elite residents of Lafayette Square, became Washington’s most exclusive enclave for fine dining and hospitality.

A fervent supporter of the cause of racial equality, Wormley was close friends with Massachusetts senator Charles Sumner (1811-1874), who had steadfastly championed the rights of African Americans both before and after emancipation. One of Wormley's prize possessions was a portrait of Charles Sumner painted by Henry Ulke and originally intended for the Charles Sumner School on M Street NW. The state of Massachusetts reportedly offered to purchase the Sumner portrait from Wormley, but he refused. “Never shall any one say that I parted with the picture of the man who befriended me and my race, for any money consideration,” he was quoted as saying. He later decided to donate the portrait to Massachusetts rather than sell it.

When President James Garfield was fatally shot in 1881, Wormley was chosen to prepare special meals for him. According to an article in the New York Herald-Tribune, Wormley had a “patented method” of making beef tea (beef broth), which he prepared for the wounded Garfield as he had previously done for the stricken Charles Sumner. The special tea “was made by broiling the tenderloin of a porterhouse steak, and while the meat was yet smoking putting it into an iron receiver heated for the purpose. A crank was then turned which brought hundreds of pounds of pressure on the steaming steak, causing every particle of its juice to stream forth. A little seasoning and the tea was ready. There was no water about it, and it was the pure juice of the beef.” Wormley also prepared chicken broth for Garfield, using the chickens grown on his farm out in the suburbs near Tenleytown. Garfield, of course, did not recover from his wounds but not for any shortcomings in the food sent him by James Wormley.

Probably the most famous historical event to occur at Wormley’s Hotel was the so-called “Wormley Conference,” which occurred in secret in February 1877. The conference was actually just an informal meeting among representatives of the Democratic and Republican parties regarding the outcome of the 1876 presidential election. The election had been held the previous November and the popular vote was very close but favored Samuel Tilden, the Democratic candidate. The electoral vote, however, hinged on the results in three southern states where massive irregularities in voting and vote counting had occurred, resulting in an impasse about how the election should be decided. In essence, over the course of several months, a deal emerged whereby Democratic congressmen agreed not to fight an electoral vote count that would put the Republican candidate, Rutherford B. Hayes, in office in exchange for the Republicans agreeing that the Reconstruction constraints they had previously imposed on the south (constraints that had protected the rights of African Americans) would be abandoned. 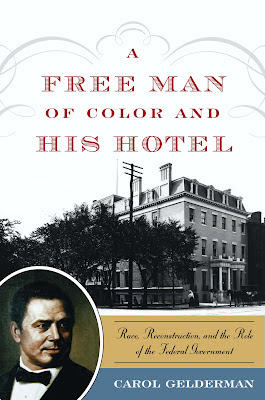 Supposedly this dirty deal was struck one February evening at the famous meeting or "conference" at Wormley’s hotel, where Democratic congressmen were staying. If true, it would indeed be ironic that a deal that ended federal reconstruction efforts supporting black rights in the South took place at a hotel owned and operated by an African American. However, as Carol Gelderman has pointed out in her book A Free Man Of Color and His Hotel, the deal had already been made by the time the Wormley Conference occurred. Wormley himself certainly did nothing to abet such deal making and surely would have done what he could to thwart it if it had been in his power.

Gelderman's short book ultimately focuses more on the politics of the rigged election of 1876 than it does on the life of James Wormley. Gelderman begins her book with absorbing details about Wormley's life, his career in Washington, and his aristocratic ancestry. She then moves into the politics of the Grant administration and the myriad scandals that made people yearn for a new political order. Change was in the air, especially after the Supreme Court issued crucial decisions that paved the way for jim-crow segregation in the South. Gelderman describes how the 1876 Centennial Exposition in Philadelphia—a perfect opportunity to highlight the strides that had been made in social equality since the Civil War—instead turned out to be the signpost of a harsh new political order when the exposition included no exhibits dedicated to African Americans. When Frederick Douglass, the most famous black man in the country, showed up with his ticket, he was refused admission to the special platform for dignitaries, according to Gelderman.

Gelderman's point is that the handwriting was on the wall. She goes on to explain in fascinating detail the outrageous shenanigans that accompanied the election of 1876 and the fact that the Republican party, with leaders like Sumner gone, had lost its fervor for championing civil rights. The result was a giant step backward for civil rights that would take many decades to reverse. Gelderman closes with a compelling run-down of the similarities between the 1876 election and the election of 2000.

And what became of Mr. Wormley? He continued to renovate and expand his posh hotel in the early 1880s but unfortunately became afflicted with kidney stones and died in Boston in 1884 after an operation to remove them. His passing was mourned across the country. He had been an ardent supporter of education for African Americans, chairing the building committee that oversaw construction of the Sumner School in 1872, and at the request of his son, a new elementary school for black children on Prospect Street in Georgetown was named after him in 1885.

Another son, James T. Wormley, who had been sent to Paris by his father early in his career to learn the culinary arts, took over management of the Wormley Hotel after his father's death. However, the hotel did not do well under the younger Wormley’s care, and after he sold it in 1893 it soon closed. A sheriff’s auction was held in 1895 and all of the rare furnishings that Wormley had accumulated were sold at bargain basement prices to customers who seemed indifferent to their historical value. Two divans that had been owned by Charles Sumner sold for three dollars apiece. The 200-room building was soon completely cleared. It was razed in 1906 and replaced by the imposing neoclassical Union Trust Company building that stands on the site today.
Email Post
Labels: Books Hotels
Location: 1500 H St NW, Washington, DC 20005, USA