A walk down Connecticut Avenue, circa 1907

This old postcard (click the image to enlarge it) shows a fashionable downtown street, fully built up with important institutions. The uncluttered, tree-lined sidewalks make for a pleasant Sunday morning stroll as the occasional streetcar or automobile rolls past. Now, some 100 years later, the street looks very different. Virtually all of the buildings have been replaced, and the grassy open space between the buildings and the sidewalk has been taken over by a much-widened street. The old-time elegance is a thing of the past. The view is facing south along Connecticut Avenue from just below M Street. A street-level view from roughly the same location appears below. 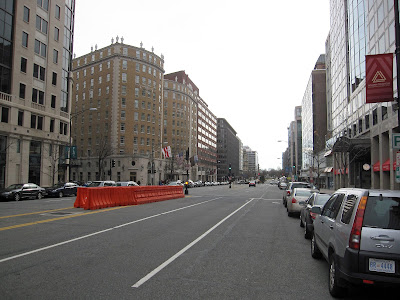 Now let's take a look at each the buildings that line the left (east) side of the street in the original postcard view.


Half cut off on the far left is the Grafton Hotel, built in 1894, at 1139 Connecticut Avenue NW. The hotel was a venture of George A. Mills (1829-1901), a native of Baltimore, and his son, and it seems to have been very successful in this rapidly growing and fashionable neighborhood. An odd event that made The Washington Post in June 1903 was an outburst by a dishwasher named Robert Beverly. Beverly feared he was about to be fired by Robert Walsh, presumably the head waiter, and "threw a quantity of red pepper" in his eyes. Walsh was rushed to Emergency Hospital but suffered no permanent injuries. Beverly was fined $50 and sentenced to a six-month jail term.

In 1931, George C. Clarke (1890-1974) purchased the Grafton as the culmination of a unique ritual begun on his wedding day 7 years earlier, when he made his first real estate purchase, a small apartment building at 1322 L Street NW. Clarke had been an attorney at the Interstate Commerce Commission, and apparently he was able to sock away enough money to get into the real estate business by the time he got married. Every year on his wedding anniversary he would acquire a new property, at first expanding his original investment by purchasing adjoining buildings and later branching out into entirely separate properties, such as the Grafton. Clarke later also acquired the "New" Ebbitt Hotel at 10th and H Streets NW and ran them both as "dry" hotels despite the repeal of Prohibition. But by 1941 Clarke was in ill health and decided to reduce his business activities. He shut down the Grafton and leased the building to the British Government for war-related uses. The hotel never reopened. The building was torn down and the lot remained vacant for many years until the current office building was put up.

The stately, gabled building on the lot south of the Grafton is the Academy of the Visitation, an institution founded and operated by the Sisters of the Visitation, the same order that has run Georgetown Visitation Preparatory School since 1799. The sisters bought a large tract of land here in 1876, before any development had begun in this neighborhood. The tract included the block to the north, and the sisters had a street cut through the middle of it, which they called DeSales Street after the founder of the order, St. Francis de Sales. The Gothic-Revival-style Academy building was made of pressed red brick and completed in 1877. The architect was Adolf Cluss (1825-1905), noted designer of many prominent D.C. buildings, including the old Center Market, the Masonic Temple on F Street NW, the Smithsonian's Arts and Industries Building, and the Franklin School. Cluss had met Karl Marx as a young man in Germany and was particularly attracted to projects such as churches, schools, and markets, where he could express his progressive social views. His tri-partite Academy building provided space for the sisters' convent as well as the school for girls, which two of Cluss's daughters attended from 1877 to 1880.

The Academy flourished here until 1919, by which time the property it occupied had become far more valuable than when the sisters had bought it. They decided to close the school, sell the property, and move their convent to Bethesda, Maryland. The building was torn down in 1923 to make way for the Mayflower Hotel.

The large building south of the Academy and across narrow L Street is the Stoneleigh Court Apartments, built by Secretary of State John Milton Hay (1838-1905) in 1902. This elegant Beaux-Arts-influenced building was designed by prominent Washington architect James G. Hill (1841-1913), who was also responsible for the original Bureau of Engraving and Printing building and the Washington Loan & Trust Company building, among many others. The building was torn down in 1965 and replaced by the Blake Building, designed by modernist architect Chloethiel Woodard Smith (1910-1992), who designed three of the four buildings that currently stand on this corner (Connecticut and L Streets NW). For a complete history of the Stoneleigh Court, see the previous Streets of Washington post.

Immediately behind the Stoneleigh Court you can see just the corner of Shepherd's Row, a set of three townhouse mansions on the north side of K Street NW facing Farragut Square. Constructed in 1873, these three grand Second-Empire houses were designed by Adolf Cluss to rival the finest houses in the city. The turreted mansion on the corner, just visible here, was built for Alexander "Boss" Shepherd (1835-1902), governor of Washington at the time. The mansion was designed with large open spaces on the first floor to accommodate the extravagant social events that were expected to be held there. Shepherd is famous for his extensive efforts to build up the infrastructure of the city during his tenure as head of the Board of Public Works and subsequently as governor of the newly designated territory of Columbia. However, he lived only a short time at the mansion on this corner, declaring personal bankruptcy in 1874. His mansion was subsequently home to a succession of distinguished tenants, including the Russian ambassador. James Goode notes in Capital Losses that "among the last great social events to be recorded here was the wedding of the daughter of American Ambassador and Mrs. William F. Draper to Prince Boncompagni of Rome in 1917. At the conclusion of the ceremony, performed by Cardinal Gibbons, thousands of live butterflies were released in the ballroom over the heads of the guests."
By the 1920s, the character of the neighborhood was changing, and the mansions of Shepherd's Row were converted to commercial use. After much modification and neglect, they were torn down in 1952 to make way for the mid-century modernist office building that stands on the corner now.

Finally, at the end of the row of buildings in the postcard view is the original Army and Navy Club building, located on the southeast corner of Connecticut Avenue and I Street, NW. The optics of the postcard view compress the space of Farragut Square, making the Army Navy building seem closer than it really was. The club was formed in 1885 by a group of veteran officers of the Mexican and Civil Wars who were following the example of the previously-established Metropolitan Club and Cosmos Club. The building seen in our view is the club's first building, constructed in 1891 of pressed red brick with stone trimming. Though the Post called the building "palatial" when it was first constructed, within a decade club members were complaining that it was too small. A new, larger clubhouse, designed by the firm of Hornblower & Marshall, was built directly across I Street in 1911. The facade of that second building still remains today, although the interior was reconstructed in 1987 and several floors of office space added around it. The original Army and Navy building was torn down in 1962 and replaced—like almost all the others—by an office building.