One hardly ever notices it anymore; it does its job quietly and unobtrusively. The original Harvard Street Bridge, built in 1901, provides an entrance to the National Zoo not from Harvard Street anymore but from down on Beach Drive. It also connects a zoo parking lot that lies between the east bank of the creek and Beach Drive. Harvard Street is now connected to the zoo by a soaring modernist bridge slightly to the north, completed in 1965. The old bridge is one of several reinforced concrete bridges built at the beginning of the twentieth century in Rock Creek Park, the first such bridges anywhere in the District of Columbia.  The others were the Boulder Bridge, discussed previously, and one known as the Pebble Dash Bridge, which once took Beach Drive over Broad Branch and was replaced in the 1960s. 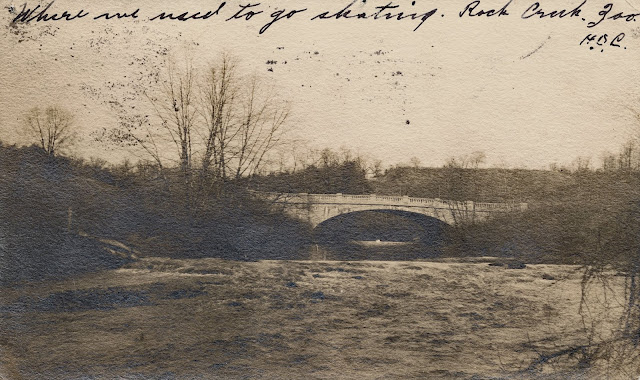 The Harvard Street Bridge is unusual in Rock Creek Park because of its neoclassical styling; others generally aimed for a more rustic look. The construction uses what is known as a Melan arch design, after Josef Melan (1854-1941), who devised a system based on arched metal I-beams encased in concrete. The span of the arch is 148 feet; the bridge is 31 feet wide and 14 feet high. It cost approximately $22,000 to build in 1901. For these contemporary shots, it's virtually impossible to get to the same position as the original postcard views. A large stone retaining wall is now on the eastern bank of the creek. It was added when the tunnel was built and Beach Drive was realigned to that side of the creek in the 1960s.
Email Post
Labels: Bridges Rock Creek Park
Location: National Zoological Park, Washington, DC 20008, USA