Farragut Square, where Connecticut Avenue intersects with I, K, and 17th Streets, NW, has been set aside as an open area since Pierre L'Enfant's original plan of Washington in 1791, although it was not specifically designated as park land. It remained largely open and unimproved through the first half of the 19th century, when development was concentrated to the southeast along the Pennsylvania Avenue corridor between the White House and the Capitol. At the beginning of the Civil War, troops were encamped there, and they damaged the trees along K Street by hitching their horses to them. After the war, efforts began to improve public spaces throughout the city. Temporary frame buildings that had been built by the military were cleared from the space in 1869, and in 1871 Congress authorized establishment of Farragut Square as a public park, with a memorial statue in its center that has been discussed in a previous post. 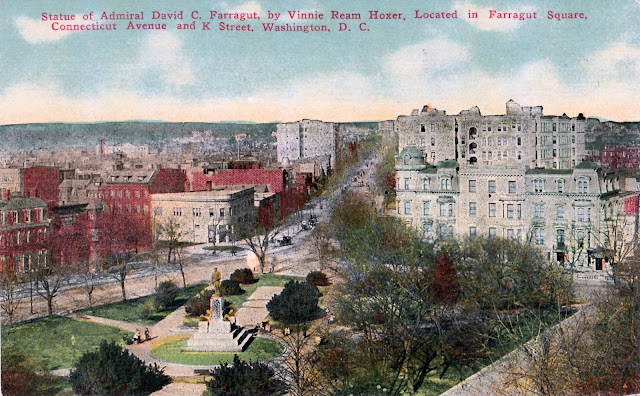 When the square was first fixed up as a park in about 1872, it was not  rectangular; Connecticut Avenue cut through the middle of it, creating two triangular parks to the northeast and southwest, which were fenced to keep cows, chickens, dogs, and pigs from foraging through. An oval area was set aside in the middle of the avenue as the future spot for the memorial statue. However, when the statue was finally completed and installed in 1881, the roadway through the middle of the square was torn up and the large rectangular park that is there today was created. Extensive flowers, trees, and shrubbery were planted, and an ornamental iron fence replaced the original wooden picket version.

Meanwhile, beginning in the 1870s, fashionable Washington began moving to this section of town. Fine mansions were built throughout the area, and in the coming decades VIPs such as the British, Russian, and Chinese ambassadors all resided around the square and entertained lavishly. The most notable, perhaps, was Shepherd's Row, seen along the top of the park (on K Street) in the postcard view. Constructed in 1873, this row of three great houses was designed by noted Washington architect Adolf Cluss, with the turreted mansion on the corner being for Governor Alexander "Boss" Shepherd. The mansion was designed with large open spaces on the first floor to accommodate the extravagant social events that would be held there in the coming years. More about the early occupants of Shepherd's Row can be found in this month's Intowner Newspaper.

Beginning as early as the 1920s, the Farragut Square area began to transition from residential to commercial use, and the trend accelerated dramatically after World War II. According to the Historic American Buildings Survey, approximately thirty new commercial buildings were built between 1955 and 1960 in the vicinity of the park, almost all of them minimally-ornamented glass and steel. The iconic Shepherd's Row was demolished in 1952, to be replaced by the distinctly modernist 1001 Connecticut Avenue office building that still stands there today, designed by the Washington architect, Edwin Weihe. With all the construction came increased demand for parking, and in early 1960 the District Motor Vehicle Parking Agency ignited controversy by proposing to build a massive public parking garage under Farragut Square. There was substantial opposition from a number of quarters, and within a year the proposal was dead. Instead, zoning specifications were altered to require substantial underground parking in all new commercial buildings. In objecting to the Farragut Square garage, the Secretary of the Interior noted, in essence, that a public garage would unjustifiably compete with private enterprise, which should be left to fill the need for downtown parking. The result would be many historic buildings razed in the coming years to create parking lots or garages.
Email Post
Location: Connecticut Ave/ K Street, Washington, DC, USA