The first postcard here shows the view as seen through one of the windows of the Treasury Department building along 15th Street NW, circa 1911. The back of the card states: "F Street from 15th, can be seen running east with the famous Café Republique on the corner. The New Willard and New Ebbitt Hotels are on the same street [the two large white buildings in the middle distance along the right hand side of the street], and below is Washington's Bon Ton Shopping District." 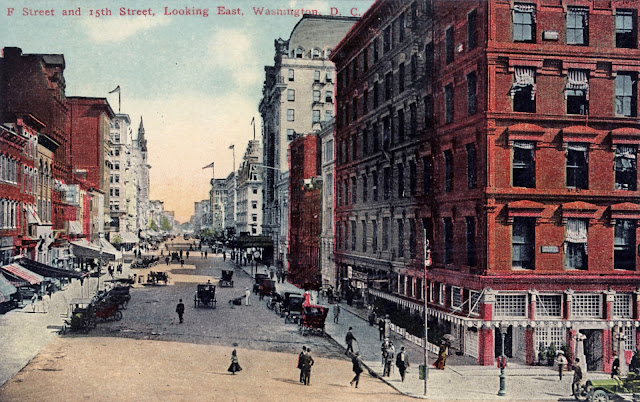 The large red building on the right hand side, which housed the Café Republique on its ground floor, is the Corcoran office building, built in 1875. The building became the art center of Washington in the 1880s, with many prominent artists keeping their studios there. It was replaced in 1917 by the Hotel Washington.

Directly opposite the Ebbitt Hotel on the left side in the distance, with flag flying, is the Westory Building on the northeast corner of 14th and F Streets. That office building was completed in 1907 and still stands—at least its outer walls do.

Our next view is from about 1940 and shows many changes in this neighborhood.  The Hotel Washington dominates the right hand side of this shot. Though it's hard to make out from this angle, the Willard has been extended further toward us with an annex built in 1925 on the site of the Union Trust and Storage Company building. Beyond the Willard Hotel, the old Ebbitt House has been replaced by the National Press Club Building, built in 1926 and housing offices and headquarters for many newspapers and journalists. The Ebbitt's bar, fixtures, and decorations were taken from the building before it was demolished and installed in the smaller building on the left side of this view (the one with the two brick chimneys), which became the Old Ebbitt Grill.

Also on the left side, we see a new, large building at the end of the block. This is Julius Garfinkel's specialty department store, built in 1929-30 and in prominent operation here for many years until it went bankrupt in 1990. At the near end of the block, on the northeast corner of 15th and H, we see Rhodes Tavern. Rhodes Tavern had been the oldest commercial structure in downtown Washington, a typical Federal-style structure built around 1800. Its first tenant, William Rhodes, ran a tavern here, giving the building the name by which it would be known for almost two centuries. Seminal early city events, such as the first town hall meetings and the first election for a city council took place here in the early 1800s, when few other buildings as large or prominent as Rhodes Tavern had yet been built. The building had many occupants, including Barbara Suter, who ran a boardinghouse here. However, contrary to many people's long-held beliefs, Rhodes Tavern was not the place where the British stopped to celebrate and have dinner after burning the White House in August of 1814. Mrs. Suter had moved from Rhodes Tavern in June of that year and thus ended up reluctantly entertaining the British two blocks to the south, at 15th and Pennsylvania Avenue (more details on that here).

Many people are familiar with the long, valiant, and ultimately futile attempt to save the Rhodes Tavern from callous destruction in 1984 by the Oliver T. Carr company, which apparently thought that the increased rent from those extra dozens of feet of office space was more valuable than the loss of goodwill from all the citizens of the city who voted in a referendum to save the historic building. Beginning in 1977, seven years of hard-fought legal and political battles took place, leading ultimately to a final appeals court ruling allowing the demolition of the building. One would certainly like to think that it would no longer be possible for such an historic building downtown to be completely demolished this way...

Here’s the same scene today, from street level. Almost none of the old buildings remain. The Hotel Washington (now “W” Hotel) is on the immediate right. The 1986 expansion of the Willard Hotel has taken up the middle part of the block behind it. On the right side, the Metropolitan Square office development, completed in 1986, has left no trace of Rhodes Tavern, other than a couple of historical markers, seen below.