The Holmes Bakery, whose slogan "Holmes to Homes" was familiar to many Washingtonians in the first half of the 20th century, was one of the city's most successful family-run businesses. The company capitalized on growing consumer trends favoring store-bought bread and home delivery to create a thriving business that now stands as a unique reminder of the city's commercial past.
James Holmes (1832-1907) was born in Philadelphia, one of seven children. As a boy he worked in his father's Philadelphia store. In 1865, shortly after the Civil War ended, Holmes, his father, and four of his brothers all moved to Washington, where James opened a grocery business. He became a successful businessman, well-liked, and involved in the city's turbulent Reconstruction-era politics. "He was one of the best-known men in Center Market and had a great many friends there," according to his 1907 obituary in The Evening Star.
But it wasn't James who made the Holmes name famous; it was his son, Lewis (1861-1922). As a young man in his twenties, Lewis joined his father in his grocery store at 1st and E Streets NW, a few blocks east of Judiciary Square. In 1892, the two went a step further, opening a bakery called Holmes & Son just north of the grocery store. Lewis, the prime driver behind the new bakery business, knew what he was doing. Previously, most people baked bread at home or purchased it at a corner market from a neighborhood baker, but by the 1890s, commercial bakeries were taking over a large percentage of the business. "Home-made bread is a back number," crowed an 1893 article in the Star. "Machine-made bread takes the cake. The twentieth century bakery is a thing of beauty and the up-to-date baker is a joy forever."
The rise in commercial bakeries went hand-in-hand with the growing nationwide obsession over food sanitation, which would culminate in Upton Sinclair's famous The Jungle, about the horrors of the meatpacking industry. The cleanliness of bread-making had been a concern for some time before that. An article in the New York Times in 1896 excoriated small traditional bakeries in that city ("The walls and floors are covered with vermin, spiders hang from the rafters, and cats, dogs, and chickens are running around in the refuse...") and asserted that "the cause of this trouble is that small bakeries are owned by ignorant persons. The large bakeries are conducted in an exemplary manner."
Lewis Holmes, at 6' 2" and 245 pounds, cut an imposing figure. An amiable, natural salesman, he was a walking testimonial to the healthfulness of his breads and pies. By 1902, he had built a large factory on the site north of Judiciary Square where he cranked out thousands of loaves of bread and other baked goods every day. That year, he escorted a Star reporter through the factory, enthusiastically pointing out its modern, sanitary processes. "I noted then the cleanliness of everything," the reporter wrote, "the perfection of the process, and especially the fact that the fruit that was being put into the pies was fresh fruit of the choicest kind—strawberries, large and luscious, the kind they serve with cream and sugar at the Raleigh or the Shoreham, blackberries and huckleberries and cherries." Even the floor "was clean enough to eat off of, with the acme of holystone whiteness that you see on a deck of a man-o'-war Sunday morning before service. This is whiter than paint, whiter than marble, and nothing but snowy linen seems its equal in suggesting cleanliness..." It should be noted that Holmes regularly purchased a significant amount of advertising space in the Star at the time.
Holmes distinguished itself from other bakeries by offering home delivery, which boasted several advantages over store-bought bread. "Bread bought in any other manner is first left in bread boxes at grocery stores," the company explained. "It is handled more or less, exposed to the air, becomes dried out and when it reaches your table the greater part of its original goodness has departed." In contrast, "Holmes' Home-made Milk Bread reaches you direct from the oven fresh every sunrise with a quality and flavor unsurpassed, free from dust and dampness," according to a 1910 company ad in The Washington Times. 'Milk' bread was simply bread to which milk had been added in the baking process. The Holmes Bakery advertised that it received fresh milk daily from Montgomery County dairies, including William Getzendanner's farm in Barnesville, Maryland.
In 1904 Holmes moved to a new bakery at 1st and F Streets NW, a block north of its original site. The company gradually expanded its plant here, taking up more and more of the block between 1st, 2nd, F and G Streets NW, adding separate bread and pie making factories, an administrative building, and stables for its many horses and delivery wagons. Holmes adopted motorized delivery vans in the 1910s as it grew to be one of the city's largest commercial bakeries. With an addition in 1917, Holmes boasted that it was one of the largest bakeries in the country and began offering factory tours six evenings a week. 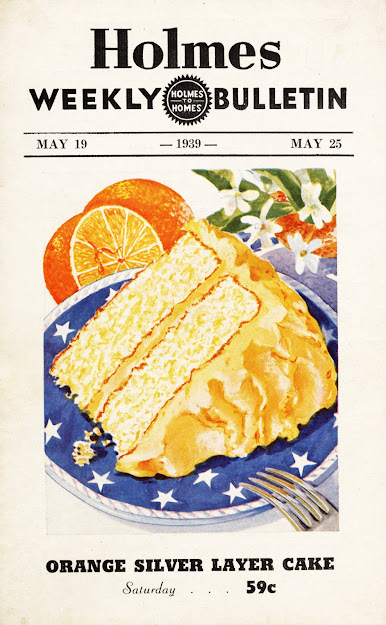 Holmes & Son continued to bake bread and pies for several decades after Lewis Holmes' death in 1922, continuing to distinguish itself with its "Holmes to Homes" delivery service. But local bakeries were an endangered species by the 1920s, when national companies took over other large D.C. bakeries. In 1956, the company sold both its business and its real estate, effectively going out of business. The General Baking Company, makers of Bond Bread, took over the old Holmes delivery routes and also continued to sell Holmes products, but they were baked at other facilities. Holmes bread continued to be produced and delivered to D.C. homes into the 1960s. It disappeared at a time when home delivery of milk and bread was rapidly dying out.
By 1965, the huge former Holmes bakery complex was gone, replaced by a parking lot covering the block between 1st, 2nd, F and G Streets NW. In June, the Georgetown University Law School announced that it had purchased the site. The law school has redeveloped the site with many modern buildings; there is no sign of the sprawling factory complex that once stood here.
* * * * *
To receive Streets of Washington by email: click on this link and choose "Get Streets of Washington delivered by email" from the Subscribe Now! box on the upper right hand side of the page.
Email Post
Labels: Industry Retail