Brentwood, an extraordinary estate in a changing countryside

In the city's early days, Washington County, beyond Boundary Street (now Florida Avenue), was a vast and sparsely populated territory. Marked by rolling hills, the land featured scattered farmsteads, much undeveloped forested land, and a number of country estate houses, many of them perched atop hills with scenic views. One such estate was Brentwood, located on the northeast side of city atop a gently sloping hill east of Boundary Street and New York Avenue. The rural retreat offered dramatic views of the city that lay a short carriage ride away. “There is no one spot near the city from which a better view can be obtained,” proclaimed The Washington Post in 1915.

The property on which Brentwood was built was originally owned by Notley Young, one of the eighteen original proprietors of the land that would become the District of Columbia. Young’s daughter, Mary, married Robert Brent, the first mayor of Washington, and the couple inherited the estate on which Brentwood would be built. Brent was born into a wealthy family in Stafford County, Virginia, that controlled the nearby Aquia sandstone quarry. (Stone from the quarry was used to build the Capitol and the White House.) Brent was appointed by Thomas Jefferson as the first mayor of the new federal city. Though reluctant to take on the burden, he served with distinction for ten years, establishing key functions such as the first police and fire departments and never accepting payment for his services.

In 1817, Brent began construction of the Brentwood mansion, an elegant structure designed for entertaining. The stately, two-story Greek Revival mansion, faced in stucco (as was fashionable in those days), had two long single-story wings at its sides. At its core was a great, domed central hall, rising the full two stories of the house, ringed with a railed gallery on the second floor, and topped with a lantern (or cupola) in the center to allow in natural light. Dining and reception rooms adjoined it on three sides. It would be the site of many an elegant fête through much of the nineteenth century.

There is strong evidence that the architect was Benjamin Henry Latrobe (1764–1820), the designer of the Stephen Decatur House and St. John's Church on Lafayette Square and one of the most important contributors to the design of the U.S. Capitol building. The neoclassical design is similar to other Latrobe works, and the domed central hall, lit by a lantern, is reminiscent of his design for St. John's. In addition, Latrobe and Brent knew each other very well, and it would be logical for Latrobe to design the house for Brent. A newspaper advertisement in 1838 refers to Brentwood as "one of Latrobe's most tasteful plans." Yet Latrobe scholar Michal Fazio has noted a number of details—the placement of stairs and hallways, and the use of dentils in the exterior trim—that are never seen in any of Latrobe's other work, casting some doubt on the attribution. Perhaps the house began with a Latrobe design but was modified as it was built. In any event, it was an exquisite building.

Robert Brent never had a chance to live at Brentwood. He visited the construction site in 1818 and had built near it an elaborate Egyptian Revival mausoleum, where he was buried after his death in 1819. Brent’s daughter, Eleanor, married Representative Joseph Pearson (1776–1834) of North Carolina but also died before being able to move into Brentwood. The house's first occupants were Pearson and his second wife, Catherine Worthington of Georgetown. The couple began the tradition of gracious entertainment and hospitality for which Brentwood soon became well known. In 1851, their daughter Elizabeth married Captain Carlile P. Patterson (1816–1881), a distinguished naval officer, in the central hall of Brentwood. Patterson later rose to become fourth superintendent of the United States Coast Survey, and the couple made Brentwood their home at that time. The house became known as the Patterson Mansion, and it continued the Brentwood tradition of refined living and elegant social events.

Probably no one realized it at the time, but the estate's picturesque location would change drastically for the worse over the coming decades. In 1835, the Baltimore and Ohio Railroad extended a branch line to Washington City, terminating in a tiny depot at 2nd Street and Pennsylvania Avenue NW. This was the first rail service to the nation's capital, and it would revolutionize travel to the city. The B and O's right-of-way skirted the northwest side of the Brentwood estate, disrupting the quiet of the rural countryside with the clatter of passenger and freight trains and greatly reducing the desirability of the area for residential living.

After Carlile Patterson’s death in 1881, the property began a long period of decline. In 1889, Patterson’s son-in-law, Francis Winslow, took over management of the estate and began leasing or selling various portions. By this time, the railroad tracks had become a major artery, transporting large quantities of industrial and commercial goods. Part of the estate on the western side was sold to the railroad for expansion of its freight yards. By the end of the century, the old house stood empty and disused, quietly tended by a caretaker but slowly falling apart. The surrounding land came to be used for Sunday picnics and recreation, and proposals were put forth for the city to purchase the property and turn it into a park. It was suggested that the mansion could be restored and reopened as a teahouse in the center of the park. Nothing came of the idea.

Inevitably, people were curious about the old house on the hill. In 1911, a Washington Herald reporter managed to get past the padlocked front gate and two barbed wire fences to inspect the abandoned structure. He found water damage in the central hall, fallen plaster in several other rooms, a cracked marble mantelpiece, and battered mahogany bannister. Desolation had replaced elegance. Everyone assumed the spooky old place was haunted, and tales were spread that jewelry and gems were buried somewhere on the premises. One tale mentioned in the Post was that gold was hidden at the mansion during the Civil War.

As unlikely as these stories might be, they motivated vandals to break in and thoroughly ransack the house one day in 1915, tapping on walls, pulling out wooden mantels and prying open old trunks. Apparently, they didn’t find what they wanted, because the thieves returned six weeks later and broke into the brick mausoleum that held Robert Brent’s and five other family members’ remains. Heavy slabs were removed from the tombs, caskets broken open and bones tossed about in search of treasure. Perhaps finding some items of jewelry, the “ghouls,” as they were called in the press, also pried nameplates and handles off of the caskets as their prizes. They were never apprehended. The human remains—which were in such disarray that it was impossible to tell which came from which casket—were reinterred at other cemeteries, and the entrance to the empty mausoleum was bricked up.

The mansion’s final indignity came just after Christmas that same year, when it was largely destroyed by fire. Students at nearby Gallaudet College saw smoke rising from the house on the hill and called the fire department. The remote location kept firefighters from getting water to the site until much damage has been done. The cause was unknown but perhaps was from children playing in the abandoned house. While there was little left of it after that, parts of the house still stood in ruins as late as 1923.

After the onset of World War I, much change came to this area, as it did to the rest of the city. The tract of land stretching from the house on top of the hill down to Florida Avenue was taken over by the Army’s Quartermaster Corps to create Camp Meigs, a logistics staging ground for the war effort in Europe. When it was opened in October 1917, Camp Meigs had eighteen barracks, six mess halls, several administration buildings and a hospital. Its objective was to assemble expert tradesmen from around the country into military units and then send them overseas for duty. "Oodles of Spooks Wait for Soldiers" read a headline in the Herald as the new camp opened in the shadow of the haunted ruins of Brentwood. 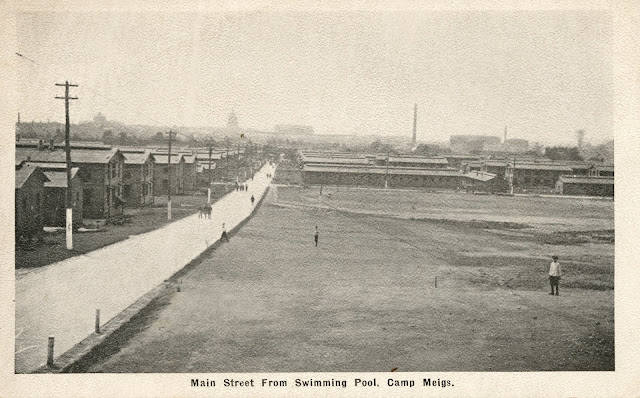 Camp Meigs was closed down by 1920, and its facilities were sold for scrap. Local hardware magnate Sidney L. Hechinger (1885–1958) profited from sale of the scrap and opened one of his first stores on part of the site. After the military left, proposals to turn the Patterson property into a park gained urgency. Camp Meigs' athletic fields and a fine swimming pool were already in place, making for an ideal neighborhood recreational site. All that was needed was for Congress to appropriate the funds to purchase the property, something that unfortunately never happened. Ultimately a small portion of the site on its northeast corner was acquired for a playground.

Throughout the 1920s, the site was used as a venue for traveling shows, including Ringling Bros. and Barnum and Bailey Circus, which set up its tents on the lot every year. The site’s location near the railroad tracks of course made it convenient. Other large events included a Ford Motor Company exhibition of $3 million worth of tractors, as well as a large Wild West circus, called the Miller Bros. 101 Ranch, which came to the Camp Meigs site almost as many times as the circus did.

Meanwhile, in the late 1920s, as plans progressed to tear down the venerable Center Market downtown, wholesale merchants who operated there began looking for a new site for their warehouses. In February 1931, one month after Center Market closed, the new Union Terminal Market was opened at the Camp Meigs tract. Plenty of space and proximity to the railroad made it an ideal location for a wholesale market that was intended to be a “feeder” for grocery stores and restaurants throughout the city. A farmers’ market in a large warehouse was opened there as well, and for many years to come, savvy Washingtonians knew that this was to place to come for the lowest prices and for exotic foods and other merchandise that couldn’t be found anywhere else in the city. After decades of decline, Union Market has come back to life in recent years as a high-end dining and retail destination. Few of its patrons are likely aware of the rich history of the site or the graceful, haunted mansion that once sat proudly on top of the hill.

Special thanks to Kim Williams for her help finding the sketch of Brentwood. A version of this article first appeared in my book, Lost Washington, D.C. (2011). Other sources included Harold Donaldson Eberlein and Cortlandt Van Dyke Hubbard, Historic Houses of George-Town and Washington City (1958); Michael Fazio and Patrick Snadon, The Domestic Architecture of Benjamin Latrobe (2006); James M. Goode, Capital Losses (2003); Kim Williams, Lost Farms and Estates of Washington, D.C. (2018); and numerous newspaper articles.
To receive Streets of Washington by email click on this link and choose "Get Streets of Washington delivered by email" from the Subscribe Now! box on the upper right hand side of the page.
Email Post
Labels: Houses