The powerful and influential Mary Foote Henderson, whom we've previously profiled, commissioned an impressive collection of palatial houses on Meridian Hill in the early years of the 20th century. One of the most prominent of these is the imposing Beaux-Arts mansion at the corner of 16th Street and Kalorama Road NW, which originally served as the French Embassy when it was completed in 1907. This well-preserved building, now home to the Council for Professional Recognition, is a striking expression of Henderson's vision of Washington as an elegant equal to Paris, with Sixteenth Street its Champs-Élysées. 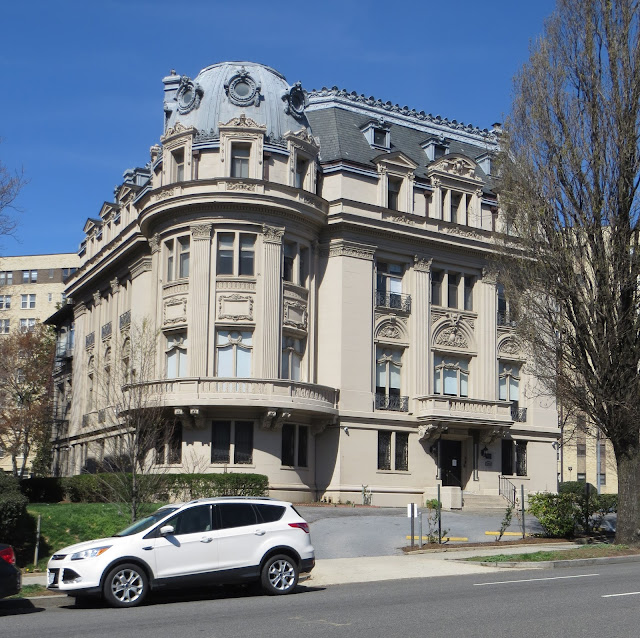 This was one of Mary Henderson's earliest ventures on Meridian Hill and the neighborhood's first foreign embassy. Henderson later explained that it sprang from her acquaintance with Jean Jules Jusserand (1855-1932), the French ambassador to the U.S. from 1902 to 1925. Jusserand was an accomplished writer and historian and became one of the best known and admired of Washington's diplomats. He was close friends not only with Mrs. Henderson but also President Theodore Roosevelt, whom he would accompany on bracing jaunts through Rock Creek Park and elsewhere in the city. As recounted in Sixteenth Street Architecture Volume 2 (1988), Mrs. Henderson told a magazine reporter that Jusserand:


...was lamenting to me his dissatisfaction with the French headquarters, then on S Street. An idea flashed into my mind.
"Let me build an embassy for you," I suggested.
"But," he hesitated, "we cannot afford to pay too much."
"Don't worry about that," I assured him. "I shall not charge you a cent more in rent than you are paying now. Choose your site and we'll begin right away." And we did.

Henderson commissioned architect George Oakley Totten (1866-1939) to draw up plans for the new embassy, which would be the second of 11 grand residences he designed at Henderson's behest. Born in New York City, Totten grew up in Newark, New Jersey, and studied architecture at Columbia University. In 1892, he won a scholarship to attend the École des Beaux-Arts in Paris. When he returned to the U.S. in 1895, he was hired as chief designer in the Office of the Supervising Architect of the Treasury, which brought him to Washington. By 1898, he moved into private practice, focusing on grand private residences for wealthy Washingtonians. In addition to the French embassy, his diplomatic residences include the embassies of Spain, Ecuador, Turkey, and the headquarters of the Inter-American Defense Board, known as the "Pink Palace."

For the French Embassy, Totten produced a highly decorative Second Empire estate house in keeping not just with the fashionable Parisian style of the day but also rivaling the many grand houses springing up elsewhere in the city, particularly along Massachusetts Avenue and in the Dupont Circle and Kalorama Heights neighborhoods. Sited as it was on Meridian Hill, where little development had yet taken place, the $75,000 mansion stood out as a dramatic contrast to the largely empty fields and modest townhouses nearby. At the time, it had a commanding view of downtown. Architectural historians Sue Kohler and Jeffrey Carson have called the structure "almost appallingly elegant." Its two main facades, facing 16th Street (the east side of the building) and to the south, are richly decorated, divided by heavy, neoclassical cornices between a sturdy and comparatively plain-looking Indiana limestone first-floor base; two elegant living (and partying) floors in the middle; and an ornately decorated, mansarded top floor and attic. The shape of the flamboyant tower at the southeast corner has reminded some observers of a thermos bottle. At the other (north) end of the building, a wonderful semicircular veranda on the third floor offers a scenic look at 16th Street to the north. Most of the building's extensively carved decoration is of terracotta.

Like many of its rivals, the new French Embassy was designed first and foremost for entertaining. As one passes through the vestibule's great, wrought-iron gates into the entrance hall, the marble staircase at the far end of the hall with its elaborate wrought-iron balustrade beckons. Immediately at the top of the staircase on the second floor is the grand salon, the embassy's largest room, a great rectangular reception hall with a balcony overlooking 16th Street that was originally finished "in the modern French style with woodwork in white and gold," according to a contemporary article in The Washington Times. Luxurious oriental carpets graced the quarter-sawn oak parquet floor, the walls were hung with silk, and a shimmering crystal chandelier hung from the ceiling. Behind pocket doors on the south end stands another salon, this one circular (it's in the tower), trimmed with elegant plaster molding around its ceiling, doors, and many windows. Just off to the right is the dining room, almost as large as the grand salon and featuring an enormous built-in sideboard with glass doors in front and back. As originally designed, any dishes proudly displayed on the sideboard's glass shelves could be replenished by servants directly from the pantry on the other side of the wall. In contrast to the grand salon, the dining room was originally finished in dark brown, the walls fitted to hang Gobelin tapestries, "of which the French ambassador has a rare and handsome collection," as the Times reported.

The business of the embassy was conducted on the ground floor. The ambassador had his office in the great round room at the base of the building's tower, while other diplomats had space in adjoining rooms. The third and fourth floors were given over to bedrooms and other residential space, with the ambassador and his family undoubtedly living on the third, which featured two balconies—the semicircular veranda on the north corner as well as a larger one at the rear of the house. Perhaps the living quarters on the fourth floor and the attic were for embassy staff.

Ambassador and Mme. Jusserand moved into the new embassy in December 1907 and held their first formal dinner in January, hosting senators, diplomats, and other high officials. The dining room table was "decorated with great quantities of brilliant and vari-colored tulips," according to The Washington Post. It would be the first of many such events, and the ambassador would host prominent dignitaries at the house, including Marshal Joseph Joffre in 1917 and French prime minister Aristide Briand in 1921. Jusserand finished his ambassadorship and returned to France in 1925.

Despite its elegance, the French always considered their rented embassy on 16th Street to be temporary. Even when the Jusserands moved in in 1907, the French government already owned property on S Street in Kalorama Heights that it hoped to build on (but never did). The 16th Street mansion, spacious as it was, soon became cramped as a working embassy and chancery. A concerted push for a new embassy complex developed in the early 1920s, when lots were purchased from Mrs. Henderson just north of Meridian Hill Park. In 1931, The Evening Star reported that France was about to build a $1,000,000 embassy on the site. The architect was Paul Cret, designer of the Folger Shakespeare Library. But it was never built, and the French also sold their S Street property when Germany bought a nearby site in 1935. Finally, in 1936, France purchased the spacious mansion of John Hays Hammond at 2221 Kalorama Road NW to be its permanent embassy and moved out of the 16th Street mansion.

Mary Foote Henderson had died in 1931, so when the French ambassador left, he turned the house over to Mrs. Henderson's estate, which apparently was little inclined to continue her vision of an exclusive diplomatic enclave on Meridian Hill. Instead, the building was quickly rented out as a boarding house. The 40-room "Casa Loma" opened in late 1936, advertising that it was "remodeled, redecorated, beautifully furnished; unsurpassed location; meals to outside guests also."

In 1941, the Henderson estate sold the building to Mrs. Bertie S. Gillespie, who continued to rent it out as a rooming house, which she called the Gil-Bert Hotel. She had a variety of tenants, including Dr. Grace Lightfoot Faus (1897-1988), who opened a branch of the Church of the Healing Christ at the Gil-Bert Hotel around 1945. It's unclear where inside the mansion the church met; perhaps it was in the former salon on the second floor. In 1946, Faus also opened a branch of the church's Divine Science School in the 16th Street mansion, offering courses such as "Basic Principles of Truth." The church continued to operate as a tenant in the hotel through the 1950s.

By 1959, after the church moved away, Bertie Gillespie sold the building, and alterations were made, dividing up the salon into smaller apartments. After a brief stint as the Graystone Manor hotel, the building was sold again in 1961 and was acquired by the young government of Ghana (which had gained its independence in 1957). Ghana made further alterations and then occupied the building as its chancery until 1988, although in 1973 it began planning to move again. Ghana's next embassy building would be an early addition to the diplomatic enclave off of Connecticut Avenue NW that formerly had been the grounds of the National Bureau of Standards. The Ghana Embassy there embodies architectural motifs that are distinctly Ghanian, unlike the 16th Street mansion's French design, which recalls Ghana's former colonial occupier.

After Ghana left, the 16th Street building was sold to its current occupant, the the Council for Professional Recognition, an association that offers certification for early childhood education professionals. The Council undertook extensive renovations of the old mansion, including completely reconstructing the building's plumbing, HVAC, and electrical systems, and replacing or repairing structural walls, flooring, windows and doors. The council finally moved into the renovated building in the spring of 1997. Later that year, the American Institute of Architects' Washington Architectural Foundation awarded the council its Stewardship Award for successfully restoring the mansion. Since that time, the Council has continued with further efforts to restore and revive its historic home, completing a renovation project in 2016 that included removing decades of white paint from the main staircase's oak bannister. The elegant mansion that was designed for entertainment now thrives as a somewhat quirky office building, its owner committed to respecting and preserving it.

Special thanks to Ken Murphy, Chief Communications Officer of the Council for Professional Recognition, for his gracious assistance and for giving me an extensive tour of 2460 16th Street NW.  Other sources included William Bushong et al., A Centennial History of the Washington Chapter, American Institute of Architects, 1887-1987 (1987); Sue A. Kohler and Jeffrey R. Carson, Sixteenth Street Architecture, Vol. 2 (1988); "The Building of the Council for Professional Recognition" (2007); and numerous newspaper articles.