A closer look: Seventh Street NW in the 1870s - and its streetcars

Seventh Street these days is just another busy downtown thoroughfare, but it has a unique history as one of the city's first and longest-lived commercial boulevards. This 1870s image of Seventh Street facing north from F Street offers a glimpse of the ragtag shops, cafes, and small hotels that lined the street in those days. Today the Verizon Center stands on the right side of the street, and this block, at the heart of Penn Quarter, once again bustles with activity day and night.

In the first half of the 19th century, Washington City's commercial life first took root along Pennsylvania Avenue between the White House and the Capitol. But Seventh Street was next in line to develop, for several important reasons. At the intersection of Pennsylvania Avenue and Seventh Street, right in the middle of the main Pennsylvania Avenue stretch, stood the great Center Market, which we chronicled back in 2010. The market served as an early magnet not just for farmers selling fresh meats and produce, but for merchants of all stripes who sold their wares in the adjoining blocks. They traveled down to the market from Maryland and Washington County via the Seventh Street Road (now Georgia Avenue). Heavy traffic along this road made it a natural draw for commercial businesses. On its southern end, Seventh Street extended to the Southwest Waterfront, a major receiving point for seafood, manufactured goods, and other materials shipped from points along the east coast. The economic importance of Seventh Street led city leaders in 1845 to choose the street as one of the first in the city to be paved with cobblestones.

The broad sidewalk and neatly fenced yard in the lower left of the 1870s photo mark the grounds of the stately Patent Office building, which had stood at the northernmost edge of downtown development when its first segment was built in 1836. In this view, G Street crosses immediately above the Patent Office grounds. The small two-story building on the northwest corner of Seventh and G serves as an oyster house. Neighborhood oyster houses like this one were found on many of Washington's corners in the 1870s and 1880s. Oysters from the Chesapeake Bay, plentiful and very inexpensive, served as staples for the working classes. John's Restaurant, located just two blocks south of here at Seventh and D, advertised in 1878, "To prevent squalls and bring peace and happiness to your family, carry home with you a box of those superior fried oysters from John's restaurant."

Just to the left of the oyster house stand a pair of four-story Federal-style townhouses. Miraculously these two buildings survive to this day; the Redline gastropub is located in one of them. The only other structure in this view that has survived is the prominent church on the left with its intricate, wrought-iron steeple. It is the Calvary Baptist Church, at 8th and H Streets NW, which we have also previously profiled. The original church, built in 1866, burnt down a year later but was rebuilt in 1869. In this view, the church dominates the landscape around it. Nowadays, it is tucked among many other tall buildings.

The small shops lining Seventh Street are full of activity, although the slow camera speed makes it hard to catch moving individuals. Many of the shops on the west side of the street, which gets the strongest sun, have large awnings that stretch across the entire sidewalk, a common feature on downtown streets in the late 19th and early 20th centuries. The awnings not only kept the sun at bay but also created a mall-like experience for pedestrians window-shopping along the street. Generally the owners of these shops lived in apartments above their stores.

H Street crosses in front of the building on the left side of the street marked "HOTEL." Above that point there are two more blocks of stores, reaching to K Street and Mount Vernon Square. Beyond that the buildings are more sparse and hard to make out, but commercial storefronts were beginning to appear at that time. Historian John Clagett Proctor (1867-1956) writes that before the Civil War there was only one structure—a bakeshop—on the west side of the street between Mount Vernon Square and Florida Avenue (then called Boundary Street or "the Boundary"). On the east side there was a brick kiln at the Boundary; Union troops used it for target practice during the Civil War. Closer down, at K Street, stood Burr's wood and coal yard before the war; frame storefronts replaced it in the 1860s. At the time of our photo, much of this neighborhood was being settled by German immigrants, who would open bakeries, restaurants, dry goods stores and furniture shops in the remaining decades of the 19th century.

The newer buildings would be larger, like the one in the lower right corner of the photo—a recently-built, four-story edifice with a fashionable scooped mansard roof covered in fish-scale shingles. We don't know who its tenants were, but there are clues. In addition to the enigmatic "Wood" (a name or a product?) on the sign at the top of a third story window, another sign advertising ice cream beckons on the sidewalk. The sturdy building remained on this corner for some 40 years; in the circa 1916 photo below it is seen advertising painless dentistry. The tall, stately Barrister Building to the right on F Street, a modern skyscraper dependent on elevators, was intended to house offices for patent attorneys. Designed by Appleton P. Clark and built in 1910, it remained on F Street until the block was cleared of buildings in the 1980s.

Turning back to the image from the 1870s, the one major element we haven't discussed yet is the presence of streetcar tracks. If the connections to Center Market and the Southwest waterfront had guaranteed the importance of Seventh Street in the early 19th century, the arrival of streetcars in 1862 ensured the thoroughfare's continued commercial pre-eminence throughout the rest of the century. The tracks shown in our photo may be the originals; they are simple metal rails for use by small, horse-drawn cars.

The Seventh Street car line was to be one of the most important north-south routes in the city. In 1890 it was converted to underground cable power, greatly increasing its capacity. The following year, the National Baseball Park was constructed at Seventh Street and Florida Avenue, and the Seventh Street cable car shuttled avid baseball fans to raucous games. The south-facing photo shown below (note the Patent Office in the background) from 1892 shows a packed three-car cable train headed out to the ballpark. The National Baseball Park was a predecessor to Griffith Stadium, the home of the Washington Senators and the Washington Grays for much of the 20th century (Howard University Hospital now stands on the site). Appropriately, Metro's bus route 74, which follows the old streetcar route, now terminates at Nationals Park at the other end of the line.

The early 20th century saw a mushrooming of commercial business along Seventh Street. The stretch in our photo was home to a wide variety of businesses, including at least two department stores: King's Palace (previously profiled), which opened in 1878 and remained in business until the 1930s; and Goldenberg's, which Moses Goldenberg (1847-1926) opened in 1895 and which lasted for sixty years. The blocks from H Street to K Street would become known as Furniture Row because of all the furniture stores, including Grogan's, P.J. Nee, Rudden's, Mazor Masterpieces, and Marlo's. A Washington Post article from 1934 summed up Seventh Street as a "great and historic shopping district" that represented the "last word in modernity":


Here are department stores, furniture stores and jewelry stores that offer all that is desirable in attire and household equipment. Handsome window displays confront the passers-by, swift elevators await to carry them to the various departments inside, and genial, well-trained employees stand ready to supply their needs.

This was one of the street's last shining moments as a mercantile center. By the 1930s the trendiest new stores were no longer on Seventh; F Street had larger stores, like Woodies and Garfinkel's, and drew larger numbers of customers. The poshest shops were further west, on Connecticut Avenue. Serious decline began to set in on Seventh Street after World War II and continued for nearly half a century. By the 1980s, the entire block on the west side of the 1870s photo—between 6th, 7th, F, and G Streets—was cleared of buildings. Surface parking lots were everywhere. The construction of the MCI Center (now the Verizon Center) in the late 1990s on this empty square is widely seen as one of the chief catalysts that led to the rebirth of the street, now once again a popular downtown destination.

You can read more about the fascinating history of streetcars in Washington in my new book, Capital Streetcars: Early Mass Transit in Washington, D.C., which is being released today by The History Press. 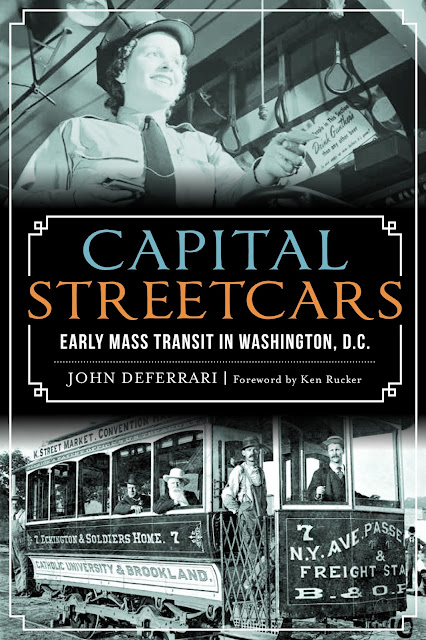 All about the rise and fall (and imminent rebirth) or streetcars in the District. Chapters include:

You can hear me talk about streetcars with Rebecca Sheir on WAMU's Metro Connection or see me in person at one of these upcoming book talks: