Once Upon a Time, Everybody Went to Hammel's

Restaurants come and go by the dozens in Washington; only a few survive through the years as bona fide local institutions. One of them was Hammel's, a German restaurant that stood for decades on 10th Street downtown, across from where the FBI Building now menacingly looms. It was hidden within a drab, not-particularly-inviting storefront, but perhaps the nondescript façade added to its character. And character it certainly had.


The restaurant was founded by Carl Hammel (1870-1952), a native of Baden, Germany, who emigrated to America in 1894 and settled in Washington a few years later. Hammel started out as a department store clerk and saved up to open his first tavern in 1904 at 25th and G Streets, NW in Foggy Bottom. It was a fairly grim, semi-industrial neighborhood; across the street was the Abner and Drury brewery, and giant gas tanks loomed to the north. Hammel's originally wasn't much more than a lunch counter, offering German beer and deviled crabs to local workers. In 1912, Hammel moved his lunchroom to 922 Pennsylvania Avenue, NW, occupying the same space that had previously hosted Henry King's millinery store. Hammel's Buffet kept its casual atmosphere but started offering a fuller menu, including the planked rock bass which would become the  restaurant's signature dish for years to come. Like Bassin's Restaurant, Hammel's was quietly successful in its early lunchroom years. Carl Hammel became a fixture of the local community, active in German-American affairs and a member of the Board of Trade.
-Not that it was easy running a German restaurant in Washington in those days. The onset of World War I brought anti-German sentiment, and, more importantly, the temperance movement increasingly gained traction. The noose began to tighten with passage of a law in 1913 restricting the number of restaurants that could sell alcohol (Hammel's was lucky to get its permit renewed annually). Prohibition came early in D.C. when the Sheppard Act banned the sale of alcohol as of November 1, 1917.

As Garrett Peck engagingly describes in his new book, Prohibition in Washington, D.C.: How Dry We Weren't, Washington never stopped drinking alcohol, and lots of people never stopped buying it at restaurants and speakeasys. Enforcing the ban became an overwhelming task. Hammel's was just one of many D.C. establishments that were raided by authorities trying to stem the illicit trade. According to The Evening Star, prohibition enforcement officers found 1,200 gallons of beer and red wine in the cellar of Hammel's on April 25, 1923. Hammel and his clerk were arrested.


Carl Hammel retired from the business in 1929, leaving the restaurant to his son, Louis J. Hammel (1899-1990), and his son-in-law, Harry G. Kopel (1887-1964), a native of Austria who had previously served as the headwaiter at the Willard Hotel. In 1931, after their old building was acquired by the government for the Federal Triangle project, Hammel and Kopel moved the restaurant a short distance to its final location on 10th Street. It was here that Hammel's enjoyed its greatest success. Phyllis Richman, writing her first review as restaurant critic for The Washington Post in early 1977, had this to say about the Hammel's of that era:


...in the Thirties and Forties, if you were downtown at night, which was the fashionable place to be—social Washington took evening strolls around the Ellipse—you dined at Hammel's.
This was a restaurant the national guidebooks touted as one of Washington's finest. It was noted for its German food, its deviled crabs and especially its beef. But eventually its fame rested on Hammel's invention born of Depression thrift: Roast Beef Bones Diablo. It was a hangout of tax court judges and bureaucrats, a lively restaurant with waiters in white aprons....

However good the Roast Beef Bones Diablo was—or the planked rock bass, for that matter—it was probably not the only reason to visit Hammel's during the Depression. There was also the "near beer," which was supposed to not have the alcohol content of real beer. In August 1932—less than 2 years before Prohibition was repealed—the police conducted a major raid on Hammel's. This time they meant business. As reported in the Post, they brought a chemist along to test the alcohol content of the 70 gallons of "alleged beer" that were found on the premises. They then proceeded to remove not only the restaurant's beverages but also virtually all of its fixtures, from the massive bar to the collection of autographed photos of celebrities that had adorned the walls. Hammel, Kopel, and two other staff were arrested. Hammel's was out of business.

About a month later, a trial was held in police court, and the restaurant men were all acquitted. It seems that an undercover prohibition agent had drunk a near-beer at Hammel's and reported that it gave him a "glow"; the raid was then conducted on his word. They jury found that the agent had no sound basis to conclude that the beverage exceeded the allowable amount of alcohol (despite the fact that the chemist's onsite tests indicated an alcoholic content varying from 2.5 to 9 percent). Further, the jury also concluded that the police exceeded their authority in confiscating the restaurant's fixtures. Hammel and Kopel won their case by lining up a number of "civic leaders" to testify that they had eaten at the restaurant and had never known it to serve anything but near-beer. However, despite their legal victory, the two were still stuck with paying the storage company that held their fixtures, both for storing them and for transporting them to and from the restaurant. All told, they estimated their expenses at $1,200. But at least they got the autographed photos back. 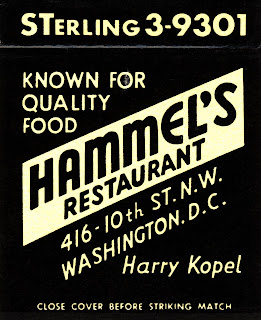 The end of prohibition in March 1934 didn't mean the end of legal hassles for Hammel's. The war years brought strict rationing for both businesses and individuals, and many D.C. restaurants, including Hammel's, ran afoul of the strict rules. More problematic was a 1949 campaign by U.S. Attorney George Morris Fay against illegal gambling. In March Fay's agents (pointedly without any involvement of local police) raided 8 sites around the city and arrested 40 men. While some of the sites had equipment and furnishings that clearly suggested they were involved in the rackets, it was surprising that Hammel's restaurant, a popular and respected establishment, was also hit. Harry Kopel and a young waiter named Danny Plummer were arrested. It was alleged that Plummer had accepted bets on horse races from Wilfred Barrett and "pretty" Edith Wildrick when serving them at Hammel's. Barrett was a law student moonlighting as an undercover agent, and Wildrick was a stenographer in the U.S. Attorney's office. When the raid came, Kopel was found with a numbers slip in his possession. 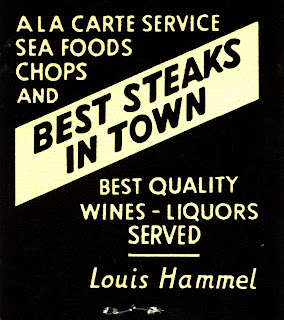 Like the earlier alcohol case, this one also fell apart in the courts. As reported in the Post, Kopel argued that he didn't know anything about gambling and had no idea what the slip of paper was all about. He couldn't tell you what an Armstrong scratch sheet was. And those numbers printed on a card in his wallet—those were the serial numbers of his two Army sons. He was soon acquitted. Young Danny Plummer, on the other hand, admitted taking bets from the undercover agents but argued he was just passing them on to bookies as a favor and that he had been entrapped. He was initially convicted, but the conviction was overturned on appeal.


Meanwhile, Hammel's continued its thriving business. The restaurant settled in for several more decades without harassment by government agents, at least as far as I can tell. A Post review in 1968 called it a "handsome, comfortable restaurant with an air of graceful middle age." By then, Hammel's carried an extensive menu of mostly seafood and steaks, offering large portions with filling sides, such as potato pancakes and dumplings. Donald Dresden reviewed the restaurant in 1970, finding the waiters gracious but the food rather poor, except for several outstanding desserts.


By the time Phyllis Richman arrived, Hammel's was clearly in decline. "A little of the old world is left in Washington at Hammel's," she wrote in a summary review, noting the "enormous array of German dishes, seafoods, organ meats, stews, grills, and international dishes" at lunch time "in a club-like room crowded with gilt-framed paintings and beer steins, even an electric organ." Still highly recommended were the desserts, especially the authentic German pastries. —Be sure to try the apple strudel!

Hammel's downtown neighborhood had gone into serious decline, of course. Around the end of the decade, the restaurant moved from 10th Street to a new location in Georgetown. But the change didn't help. Within a few years, the venerable eatery closed for good.