A modest, four-story storefront once stood near the corner of 14th Street and Pennsylvania Avenue NW overlooking Washington's first sidewalk café. From an illegal gambling parlor to a trendy 1960s discotheque, the building saw much in the way of what Washington had to offer for nighttime entertainment. It began its colorful career in about 1872, although according to an assessment prepared by the Historic American Buildings Survey, its architect and exact date of construction are unknown. Its classic Italianate facade was of pressed brick with ornamental cast-iron window hoods and sills.


D. Loughran & Co. occupies the ground floor of 1347 Pennsylvania Avenue NW (the white building) in this circa 1920 view (Source: Library of Congress).

The building was on a stretch of E Street (between 13th and 14th Streets NW) that was once considered to be part of Pennsylvania Avenue and that was known since the mid-19th century as "Rum Row" for its drinking and gambling dens. According to journalist George Rothwell Brown, the bottom floor was occupied by John Lawrence Kidwell's drugstore, and it had marble floors and interior woodwork of beautiful carved mahogany. Kidwell was known as the "Quinine King" for having supplied various pharmaceuticals to the Union Army during the Civil War. Upstairs was the celebrated gambling house of George Parker, where the "best known faro bank in town" operated. "A Chinese restaurant now serves chop suey in the rooms which in the hectic past were dedicated to the Goddess of Fortune and which echoed to the whir of the roulette wheel and the click of dice," wrote Brown in The Washington Post in 1923. By 1887, a tobacconist by the name of Daniel Loughran had moved into the ground floor. He and his sons ran their business there until 1929. 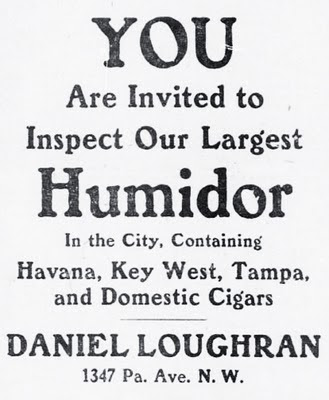 Over the next ten years, an assortment of other commercial enterprises came and went, including offices of The New York World and the National Press Club and what Brown called "various drinking clubs." Then in 1939 Max Bassin opened his restaurant there. Born in New York, Bassin had moved to D.C. as a child and attended Cardozo (Business) High School. He worked at the Treasury Department from 1933 until he decided to quit and start Bassin's Restaurant. He went in on it with his wife, Sarah, and her brother, Harry Zitelman. Bassin's was a rather ordinary lunchroom-style restaurant for many years, concentrating on selling corned-beef sandwiches for 25 cents and hot dogs for a dime. Then in 1949, Bassin decided to quit the business and devote his attention to real estate. He left the restaurant in the hands of his sister and Harry Zitelman.

Zitelman, who was the son of Russian immigrants and had grown up in Baltimore, capitalized on Bassin's prime location near the National and Warner theaters, various newspaper offices, the Willard Hotel, and the District Building. As time went on, Zitelman built Bassin's up until it was a well-known Washington institution. He expanded into the building on the corner, making Bassin's a sprawling complex that was frequented by both tourists and natives alike. And like all top-drawer restaurateurs, Harry Zitelman was a consummate showman. He didn't just work hard to promote Bassin's; he made sure everybody knew he was doing it. As reported in The Washington Post, Harry Zitelman and Jean Moran of L'Espionage at 2900 M Street NW sought permission in early 1959 from the District's Board of Commissioners to set up sidewalk cafés. The request was not well-received. One concern was a 1934 law that banned consumption of alcoholic beverages on District sidewalks—although it was not clear that serving any kind of food or beverages would be legal. Opinions about the proposal touched on many other issues as well. The Post talked to Leonard Carmichael, secretary of the Smithsonian, who said he had "enjoyed looking at sidewalk cafes in Spain and Rome, but I'm not sure I would enjoy them in Washington." Why not? He apparently didn't say. Prominent socialite Gwendolyn Cafritz held that "Washington is just perfect the way it is. I don't think the tempo of Washington is suited to sidewalk cafes. Nobody would have time to sit in them."

These were just the opening salvos in the two-year struggle to bring sidewalk dining to Washington. While Moran seems to have dropped out of the fight, Zitelman kept pushing. In late 1960, a ruling came down denying Zitelman's request on the grounds that alcoholic beverages couldn't be served on the sidewalk. Zitelman responded by asking for a permit to open his sidewalk eatery without the alcohol. At a March 1961 hearing before the Board of Commissioners, Zitelman presented a stylish, Parisian-looking sketch of how his proposed sidewalk café might look. But not all hearts and minds were won.


As reported in the Post on March 17, 1961, an assortment of D.C. government witnesses outlined a litany of perils that would befall the hapless citizenry if sidewalk cafés were allowed in the District. These hazards included the following:
After all that, according to the Post, Chief Commissioner Walter N. Tobriner observed that he "couldn't understand how, with all the calamitous eventualities foreseen by city officialdom Europeans have been able to operate sidewalk cafes all these years." Concluding that "anything which would enhance the innocent enjoyment of Washington... should be allowed," Tobriner then ordered that regulations be drawn up that would allow sidewalk cafés while affording adequate safety. Indeed, it became clear that city officials had overstepped in their opposition to the idea. The Post ran an editorial favoring it; Art Buchwald wrote a column making fun of the city's objections. By the time a public hearing was held in June, most everybody was behind the idea, with rare exceptions, such as H.B. Niece, executive vice president of the Organized Bible Class Association. As the Post reported, Niece thought the cafés would encourage public drunkenness and panhandling and amounted to "a Castro grab of public property." His objections were overruled, as it were. 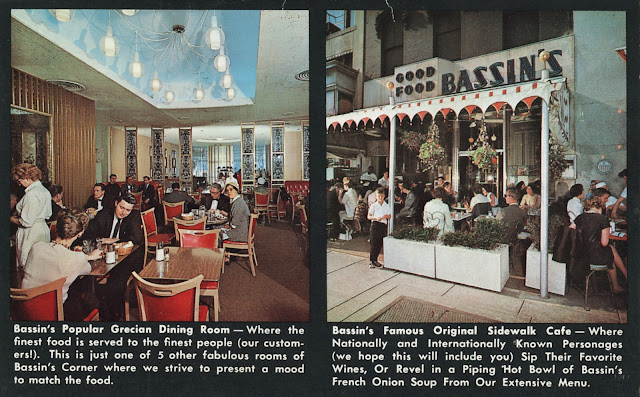 The Sidewalk At Bassin's opened with much fanfare in August 1961 and was an instant success. Zitelman found his overall business up 15 percent. Still, there were complaints that the café should serve "something beside malts," so Zitelman worked to get the alcoholic beverage ban lifted, which he achieved the following year. In 1962, Washington's second sidewalk café opened at Chez Francois on Connecticut Avenue NW. By 1963, some 20 different restaurants had joined in, and the sidewalk café had become an established part of D.C.culture.


The sidewalk café wasn't Zitelman's only innovation at the Bassin's complex. He also opened one of the city's first discotheques, called the Top O' the Walk Twist Room, in the former Atlas Club upstairs from the dining room in 1962. According to the Post, Zitelman got the idea after seeing Chubby Checker dancing the twist in New York. The Post's arts commentator, John Pagones, visited in April 1962 and was very enthusiastic. "The Fred Astaire dancers give twist lessons every night but it seems like bringing politics into Washington. Those people can really twist. The supply seems bottomless." Ranging about Bassin's, Pagones noted that in addition to the dining room and cafeteria, there was also a lounge where "Jerry White knocks the daylight out of a piano with his honky-tonk songs," as well as a "noisy, chummy rathskellar" in the basement called L'Escapade Room. These were Bassin's salad days, so to speak, and unfortunately there would not be many more of them.


Bassin's was picketed in the mid-1960s for its hiring practices. It was accused of keeping most African-American employees in the kitchen and using mostly whites for the "out front" positions, such as waiters and waitresses. Bassin's agreed to hire more equitably, but business began to decline anyway after the April 1968 riots. In 1976, the restaurant was sold to a wealthy South Vietnamese family that had decided to move to Washington and get into an American type of business. Then, after only two years, the restaurant was gutted in a suspicious pre-dawn fire in October 1978. The police arson squad told the Post that they were 75 percent sure that the fire was started by igniting a flammable fluid. However, by that time the building was already slated to be torn down to make way for a massive new hotel/office complex. Within a year, with the blessing of the Pennsylvania Avenue Development Corporation, the burned-out structure was razed. The J.W. Marriott Hotel now stands on the site. Still, a few shards have survived of this venerable little building that witnessed so much of everyday Washington life. On 8th Street NW, just down from the other little commercial building we recently profiled, a few of the metal window hoods and sills from Bassin's are hung ghost-like over large vents at a Pepco substation. If they look a bit pathetic hung up that way, what's worse is that there's no sign telling where they came from.