It was supposedly “one of the largest parking and shopping units in the country” when the Chevy Chase Ice Palace and Sports Center opened in 1938 on upper Connecticut Avenue. As strip malls go, the building, which still stands in the 4400 block of Connecticut Avenue just north of the Van Ness Metro stop, now looks quite tiny, which says something either for the exaggeration of the Washington Post article of November 20, 1938, the growth of shopping malls since then,—or both.

In 1938, this part of the city was well on its way to transitioning from a lightly populated “suburb” within the District to an urban residential zone. The avenue had been zoned in 1920 such that most of it was to be lined with medium-density apartment buildings. At regular intervals, single blocks were designated for commercial development. The 4400 block was one such commercial zone.

Developer Garfield I. Kass (1890–1975) saw a great opportunity at this location, despite the difficult site that sloped steeply from street level down to a tributary of Rock Creek in the valley below. There was pent-up demand for shopping from local residents that did not have other options in their neighborhood. Beyond that, “park and shop” centers like this one were hot commodities in the 1930s, after the successful development in 1930 of the Park and Shop center just down the street in Cleveland Park. Kass had already developed park and shop centers in the Rosslyn and Clarendon neighborhoods of Arlington County, Virginia, and another at Georgia Avenue and Rittenhouse Street, NW, in Shepherd Park. Situating such centers along main commuting arteries—on the same side of the street as the evening, homeward-bound traffic—was sure to make for substantial profits.

When the complex opened, it had everything: Washington’s first indoor ice-skating rink, 41 bowling alleys, and an assortment of retail stores including F.W. Woolworth’s, an A&P grocery store, Best & Co., and a People’s Drug store. The ice skating rink was the jewel in the crown. “Realizing that ice skating in the United States is attaining a popularity never before realized, the builders of this center decided to include provision for this sport in their project. It is a natural pastime for the youth of the country and now, in many schools, it is being considered good form and part of one’s general training to be able to skate,” the Post solemnly pronounced. It certainly seemed true at the beginning. On opening day, 2,200 people hit the rink, raking in $4,000 in profits for Kass Realty.

In addition to the signature skating rink, the building had a number of below-grade floors, since it was built on a steep hillside descending into Rock Creek Park. The lower floors held the bowling lanes, as well as pool tables and ping pong tables. In fact, the center became a venue for regional championship table tennis in the 1940s. In the end, however, the indoor sports gravy train did not last long on Connecticut Avenue. In 1950, the Evening Star Broadcasting Company, operators of WMAL-TV, leased the second-floor ice-skating rink space for use as a broadcasting center. Three TV studios were constructed in the space formerly occupied by the rink. Over the years, the WMAL studios were used for a number of historic broadcasts, including Ruth Crane’s pioneering series The Modern Woman and the much-loved children’s show Claire and Coco, as well as Town and Country Time, a variety show hosted by young country/western singer Jimmy Dean (1928–2010), who gained fame for his singing in the 1950s and for his pure pork sausages in the decades following. On March 23, 1956, Dean had as a guest on his show a nervous young singer named Elvis Presley, then just coming into his own. Presley was one of many entertainment personalities who made stops at the Connecticut Avenue broadcasting complex.

WMAL, the predecessor of WJLA-TV, broadcasted on Channel 7, and as a child, I remember a large flashing neon sign on the building at night that would read 7…7…7…Good Looking! The sign was especially noticeable as you came out of the Hot Shoppes restaurant across the street, perhaps after enjoying some delicious Pappy Parker’s fried chicken.

In 1988, WJLA moved from the old ice palace building to the Intelsat Building several blocks south. The owners of the old building then embarked on an extensive renovation and remodeling of the space, substantially compromising its historic fabric. The entire rear facade of the building was removed and the interior largely gutted. The cavernous second floor, which originally held the ice skating rink and had been subsequently used for broadcast studios, was divided horizontally to create an extra floor of office space. The former parking lot in front of the building was excavated, and a new garage was wedged into the underground space beneath it. The building's facade was altered with the removal of the old second-floor windows and the addition of two bulky central towers to house elevator shafts as well as a new arcade at street level. When the renovations were complete, little was left of the old building other than sections of the original brick facade. Since 1990 the structure was operated as a mixed office and retail complex known as Van Ness Square. Retailers Office Depot, Pier One Imports, and other shops moved in in the early 1990s. Meanwhile, the building's remaining historic elements stood as notable examples of the Streamline Moderne architectural style, as seen in this close-up of brickwork on the facade. The B.F. Saul Company began demolishing the structure in December 2013, with plans to replace it with a large apartment building.

As of April 2016, the new apartment building, called Park Van Ness, was nearly complete. The building's design recalls the Art Deco look of the Chevy Chase Ice Palace as well as another B.F. Saul property on Connecticut Avenue, the Kennedy-Warren. 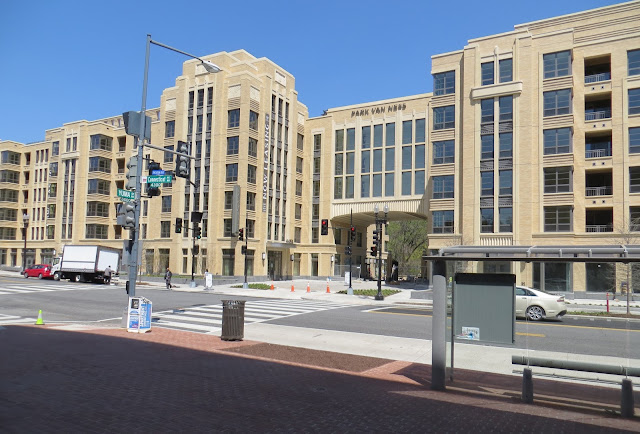