The William Howard Taft Bridge carries Connecticut Avenue over Rock Creek Park in Washington, D.C. A grand project, planned and executed by the D.C. government over ten years (1897-1907), the bridge was admired for its sublime beauty from the start.  It was one of the first and largest unreinforced concrete bridges in the world and, though costing only about $846,000, the bridge gained a reputation as being the first in Washington to cost $1 million and thus was nicknamed the million-dollar bridge for many years.

The bridge rises 136 feet from the floor of Rock Creek Park and extends 1,341 feet across the valley. The road surface is supported by seven arches; the five large ones are 150 feet across, and the two smaller ones measure 82 feet. Huge wooden supports were constructed to hold these arches as they were being assembled. The massive piers planted in Rock Creek Park that hold up the arches are twenty feet thick and solid concrete. Originally granite trim was planned, but in the end cost considerations dictated an all-concrete structure.

The bridge replaced an iron-deck truss bridge, known as the Woodley Lane bridge, that had been built in 1888 slightly to the west and lower down.  Within a few years, that light-weight structure was deemed too small, too difficult to get to, and just not adequate to carry Connecticut Avenue over the Creek Valley.

Intensive construction began in 1904, and the Washington Post sent an intrepid reporter out on the unfinished structure in 1905: “To stand on the crown of the big center arch, peer over the edge at the creek that seems a tiny rill, and to catch a note now and then of its laughter as it babbles along a hundred and thirty feet below, makes you wonder at the greatness of the work, and feel in awe of it.... But this intimate view is obtained only at some risk and quite without the consent of the engineer in charge, whose back must be turned before you venture out on the half finished arches…” “How long will the bridge last?” our spunky reporter asked the supervising engineer. “Until it is shaken down by the earthquakes at the Judgment Day,” came the colorful and immodest reply. (see The Washington Post, October 22, 1905)

The expense of the bridge was seen, correctly, as a wise investment. Its construction marked a key turning point in opening up the extension of Connecticut Avenue and making vast stretches of upper Northwest Washington D.C. more easily accessible and thus more desirable as residential areas. Woodley Park and Cleveland Park had already been established as exclusive residential neighborhoods, but now much of the territory between and beyond them would begin rapidly developing. 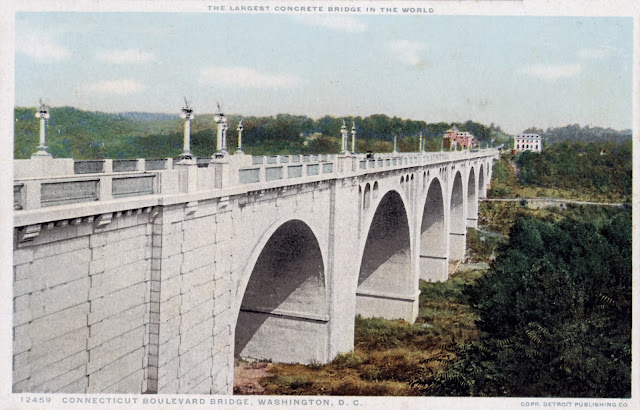 While construction of the main concrete structure proceeded well, there seem to have been many delays in the finishing touches. The cast iron railings were delayed when the New Jersey firm supplying them went bankrupt. The lions at each end of the bridge, sculpted by R. Hinton Perry, weren’t completed until six months after the bridge opened. Perry’s contract had been delayed by fears the project would run out of money and be unable to afford the sculptures. (The lions were restored, not very successfully, in 1965 and then replaced altogether in 2000 due to deterioration). The 28 eagle-topped lampposts, presumably completed on time, were designed and sculpted by English-born architectural sculptor Ernest C. Bairstow (1876-1962), who also decorated many other important Washington DC buildings. An annoying detail for early pedestrians was the unfinished roadway surface, which had been built on four feet of earthen fill to absorb impact and sound. For nearly two years after the bridge opened, whenever cars drove by, huge clouds of dust would be kicked up into the faces of passersby. After receiving complaints, the District finally paved the street properly in 1909. 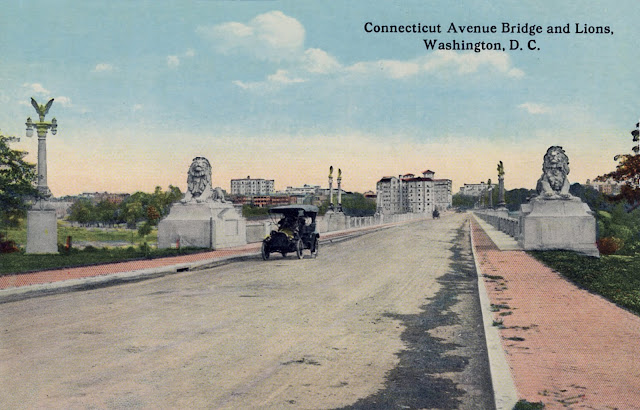 The bridge was originally called simply the Connecticut Avenue Bridge. Ex-President William Howard Taft lived nearby, on Wyoming Avenue in Kalorama, when he served as Chief Justice of the Supreme Court (1921-1930). He had the habit of taking a morning constitutional across the bridge every day, enjoying the magnificent vistas.  In 1931, after Taft’s death, the District decided to rename the bridge in his honor. 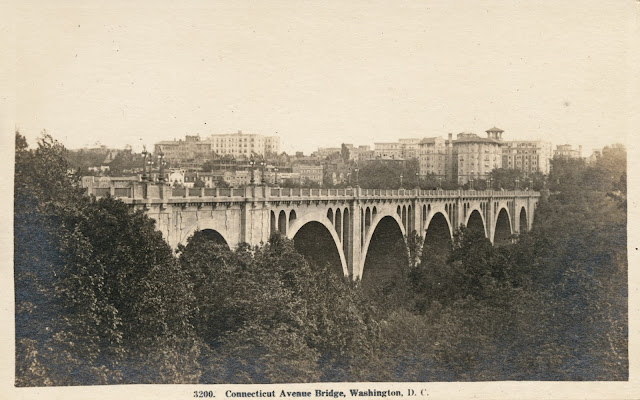 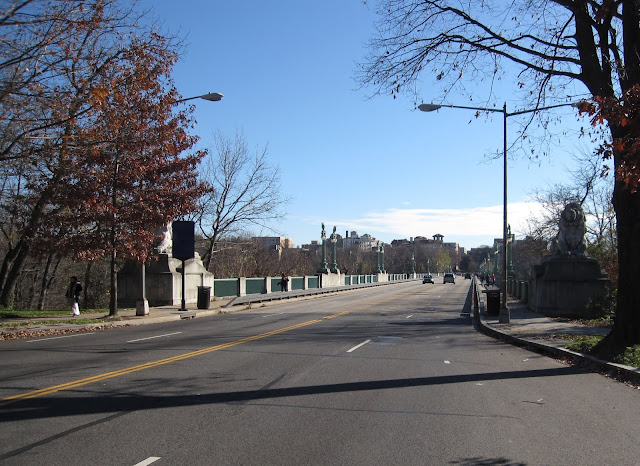 The postcards all date to the years immediately after the bridge opened in 1907. This last view is a contemporary comparison shot from the Woodley Park side of the bridge.
Email Post
Labels: Bridges
Location: Northwest Washington, DC, USA