Washington managed to get through the Civil War by the skin of its teeth. For years it had been a small, unkempt, backward town, perennially neglected by its congressional overlords. The war violently wrenched it into the modern world. Perched on the edge of the Confederacy and heavily populated by Southern sympathizers, it was a place of turmoil and danger. Powerful armies ran through and around it, disrupting lives, convulsing the countryside, and flooding the city with thousands of wounded and dying soldiers. It would never be the same again. 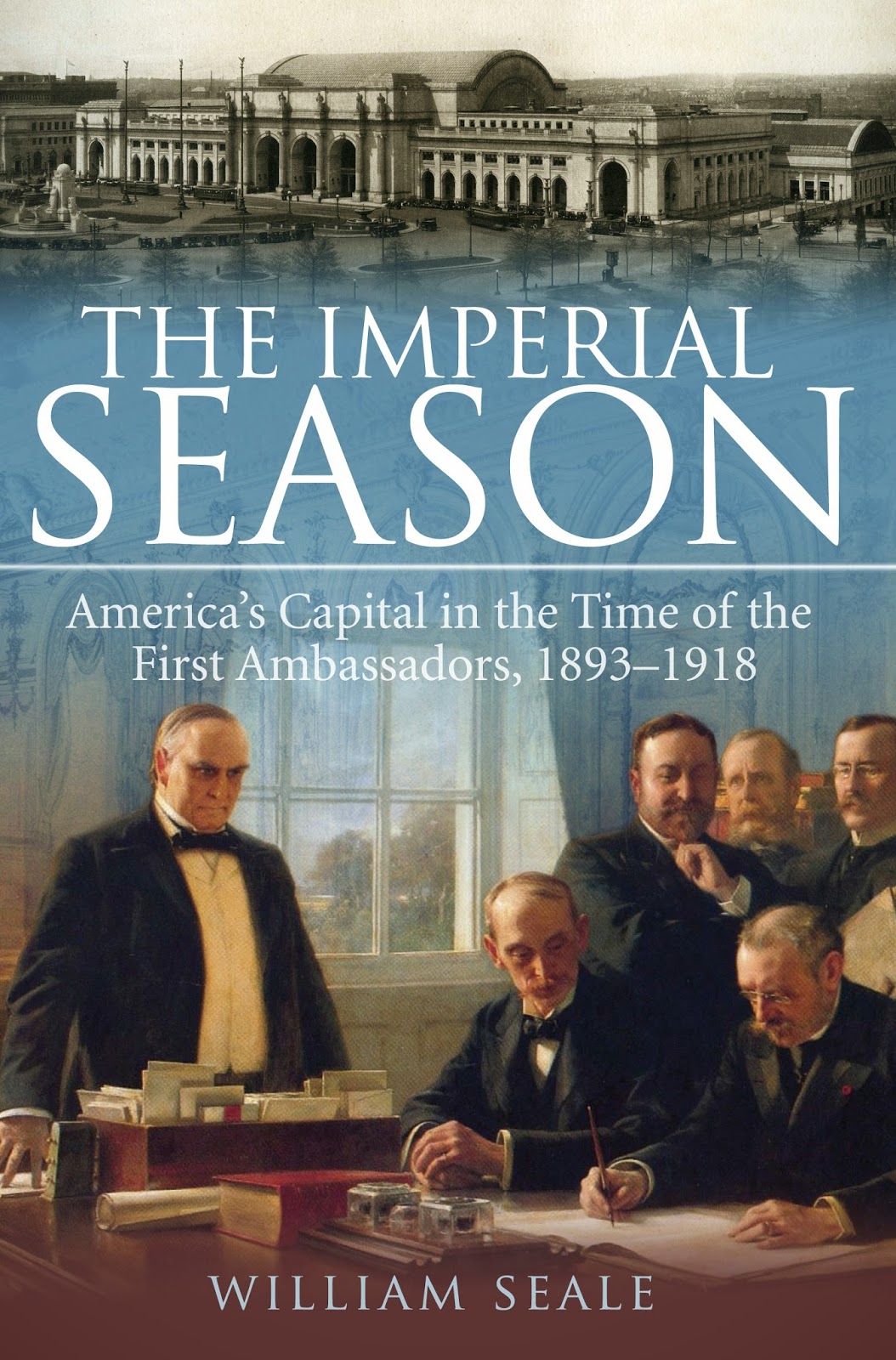 But it was in the decades after the war ended that the really big changes occurred. The old Southern gentry either faded away or retreated behind closed doors to become “cave-dwellers.” Northerners took over the government, commerce, and the city’s social life. In the 1870s Governor Alexander “Boss” Shepherd famously extended and paved the city’s streets, laid new sewers, and generally transformed the city’s infrastructure overnight. Elegant homes were built, and a new breed of corrupt politicians, decadent lobbyists, and genteel socialites moved in. The climax of this dramatic trend was a brief, sublime era at the end of the century when Washington society was filled with exquisite refinement, lofty aspirations, and extraordinary pretense. It is this moment in the sun that noted historian William Seale brings so artfully to life in his fascinating new book, The Imperial Season: America's Capital in the Time of the First Ambassadors, 1893-1918, published by Smithsonian Books.


Seale begins in 1893, the year Great Britain raised its minister plenipotentiary in Washington, Sir Julian Pauncefote (1828-1902), to the rank of Ambassador, the first time a foreign country had recognized the pre-eminence of the United States by officially establishing an embassy here (of course, only after the U.S. had sent an ambassador to London). Soon Europe's other major powers had embassies here as well, and a new order built on European diplomatic formalities came to dominate the capital's social life.

Seale revels in the great men and determined women that transformed Washington in those days. One of his favorites is Alvey Adee (1842-1924), a top State Department aide who, despite being deaf, played a central role in orchestrating not just all of the city's diplomatic events but many private functions as well, ensuring that all went off precisely according to the elaborate standards of the day. Though largely unknown now, Adee was a fascinating man. Seale introduces us to him as the city's most famous bicycle fanatic. "Although he was an easy-going man on foot, Adee took a mad delight in speed that sometimes made him a menace on his bicycle. Pedestrians instinctively stepped aside as he flew along, bent over the handlebars," Seale tells us. It's just one of many telling details he includes about the multitude of personalities that animated the city's imperial season.


Another key player was John Hay (1838-1905), who had begun his career as one of Lincoln's personal secretaries and by the 1890s, after marrying into money, seemed well-settled into a life of quiet leisure. But in 1896 he suddenly entered the political spotlight when he decided to promote, very successfully, the cause of William McKinley for president. He went on to serve as McKinley's ambassador to London and secretary of state. "When he became ambassador, relations were still sensitive between the United States and Great Britain," Seale explains. "...Hay was able to smooth it all out by sheer force of personality and intelligence, assuring the British that they and the United States had common interests and a common civilization." Hay presided over relations with Britain in what Seale calls the "pivotal year" of 1898, when the U.S. was proudly snatching a handful of former colonies from Spain after gliding to victory in the brief but glorious Spanish-American War. The country had come of age on the international scene, and the feathers of our British chums were barely ruffled.

The stories of the women of that era are among the book's most compelling. The book opens with the spectacle in 1893 of the royal visit of the Infanta Eulalia of Spain (1864-1958), the 29-year-old aunt of Spain's boy king Alfonso XIII. The infanta was traveling to the U.S. to attend the Columbian Exposition in Chicago, but she stopped for several days in Washington and, like other young attractive princesses before and after, created a sensation wherever she went. "At the White House reception the whole world seemed to turn out," Seale writes. "Thousands pressed to the iron fence; enthusiastic males scaled the elm trees and President Jackson's equestrian statue in Lafayette Park, and some spectators climbed to the roofs. Windows of adjacent buildings were filled with people." Though trouble was already brewing in Cuba, the war with Spain was still five years away.


The headstrong Eulalia would go on in future years to write controversial books espousing progressive ideals, including women's independence, and her mention at the beginning of The Imperial Season bookends nicely the portrait towards the end of the book of Alice Paul (1885-1977), a firebrand for women's rights who broke from her less aggressive predecessors in pushing for a constitutional amendment to give women the right to vote. Seale vividly describes the women's rights parade that Paul helped organize in 1913, the day before Woodrow Wilson's inauguration and 20 years after the Infanta Eulalia's procession. So much had happened in those 20 years. The 1913 parade was a major turning point in pushing the cause of women's rights forward; ratification of the 19th amendment to the Constitution came just seven years later.


As an architectural historian—he previously penned the definitive two-volume history of the White House—Seale takes great interest in the physical development of Washington during this pivotal era. Of course this was the time of the McMillan Commission, which envisioned dressing the city's core in rich neo-Roman marble attire to match the country's newfound imperial ambitions. Beaux-Arts architect Daniel Burnham (1846-1912), a member of the commission, supposedly said "Make no little plans; they have no magic to stir men's blood," summing up the architectural tenor of the day. The magnificent Union Station (completed in 1908), a project he spearheaded, was surely one of the best results of the new City Beautiful push, although Seale fills us in on the drama and controversy over erection of other important Beaux-Arts pathfinders, such as the new Department of Agriculture building on the Mall (1905) and the new National Museum (1911, now the Museum of Natural History).


Perhaps most emblematic architecturally of the Imperial Season are the great mansions of Massachusetts Avenue, a phenomenon that Seale explains with far greater acumen than others who have tackled the subject in the past. Here are the stories of the Andersons, the Townsends, the Walshes, and the Pattersons—all the wealthy families that built extraordinary Beaux-Arts mansions along Massachusetts Avenue, many of which remain as the city's most distinguished residences. Set in their unique social context and brought alive with all the charming details of Washington's annual entertainment season (from November to May), the fragile beauty of these great houses takes on a special poignancy. As much as we admire them, these splendid buildings are the profoundly impractical and extravagant products of a fleeting era who aspirations would be dashed by the onset of World War I, never to recover. After just a couple of decades as the entertainment centers they were designed to be, these houses have mostly survived as private clubs and embassies, preserved jewels from the past. They are fitting reminders of Washington's glorious imperial season, and all the better appreciated after a reading of William Seale's fine book.