The Old Shoreham Hotel at 15th and H Streets NW

Built in 1887 by then-Vice President Levi P. Morton, the original Shoreham Hotel stood at 15th and H Streets NW and was designed by the New York firm of Hubert Pirsson and Company. It was named after Morton’s birthplace, Shoreham, Vermont. Morton had made his fortune in the department store business, and decided to build a hotel on this property as an investment. Expanded in 1890, it was a very fashionable and elegant hotel in turn-of-the-last-century Washington, especially with congressmen from New York and New England. 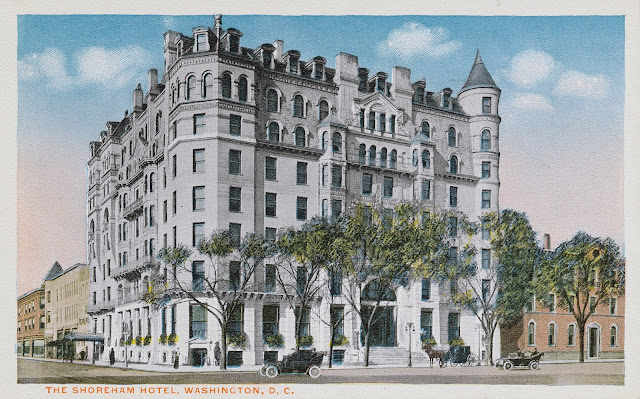 Much effort was spent to keep the hotel stylishly up-to-date, including a major renovation in 1902, which included a dining room with yellow and green paneled walls, onyx wainscoting, and an elaborately plastered and gilded ceiling. The hotel was completely remodeled once again in 1913 by Waddy B. Wood, in the then-popular neoclassical style. On the first floor, a heavy brick wall was dismantled, opening up an old hallway and two adjoining rooms to create a large new lobby graced with white pillars and painted a muted brown with golden accents. The main dining room adjoining it was "finished in French gray, with carpets and hangings of old rose," as recounted by The Washington Post. The renovation, completed in January, was ready in time for President-Elect Woodrow Wilson to stay there for his first inauguration in March. These years represented the pinnacle of the old Shoreham's prestige. Despite these efforts, the Shoreham remained an odd building of mixed architectural styles that undoubtedly kept making it seem out of date. By 1927, the hotel was bankrupt, and it was sold at auction to developer Harry Wardman. Originally a new neoclassical hotel was going to be built to replace it, but instead a modern office building, also called the Shoreham and designed by noted Washington architect Mihran Mesrobian, went up after the hotel was torn down in 1929. Shortly thereafter construction began on the current Omni Shoreham Hotel at Connecticut Avenue and Calvert Street, NW, in Woodley Park.

The old Shoreham Hotel is the large tan building on the left in this postcard view of 15th Street seen from Vermont Avenue, N.W., around 1914. The white building behind it is the Southern Building, designed by Daniel Burnham and built in 1911, which still stands today, sporting an additional two floors added in 1987. On the right side, the First American Bank building with the large classical Corinthian columns, designed by Waddy Wood’s firm and constructed in 1906, also still stands, as does the twin-towered Woodward Building behind it, from 1911, which has just been recently renovated. Below is a current view from more-or-less the same location.