The Metropolitan, aka Brown's Marble Hotel

Down one block from the National Hotel, along the north side of Pennsylvania Avenue, stood another of the Washington's famous old-time hotels, the Metropolitan. A tavern or boardinghouse of some kind was kept at this site from the city's earliest days. John Davis, one of the first genuine hoteliers in the city, opened Davis's Hotel here in 1805 and hosted James Madison's second inaugural ball in 1813 as well as both of James Monroe's (1817 and 1821). Like many such early Washington establishments, the hotel at this site (under a variety of names) was gradually assembled over many years by combining, modifying, and extending a row of Federal-style townhouses.


Jesse B. Brown of Alexandria, a protégé of John Gadsby (who would operate the rival National Hotel), bought the Davis Hotel in 1820, remodeled and enlarged it, then re-christened it Brown's Indian Queen Hotel. He hung a large sign out front with a "lurid" picture of Pocahontas brightly painted on it. Brown was a classic entrepreneur, styling himself "the prince of landlords." He was known for his large white apron, his officious and personal attention to every guest, and for the large decanters of brandy and whiskey that he would ensure were placed at every table setting. The hotel became a political stage in 1841, when President William Henry Harrison died after only one month in office, having caught pneumonia at his own inauguration. Much confusion arose about how the presidency would transfer to the vice president, since this situation had never previously arisen. Vice President John Tyler wasn't even in town; he hurried up from Williamsburg, Virginia, and stayed at the Indian Queen, where he quietly took the oath of office as a sort of precaution, convinced that he was already president automatically. There was much dissent at the time (mostly from political opponents) about whether Tyler ("His Accidency") was legitimately president, but his stance was finally codified through passage of the 25th Amendment to the Constitution in 1967. 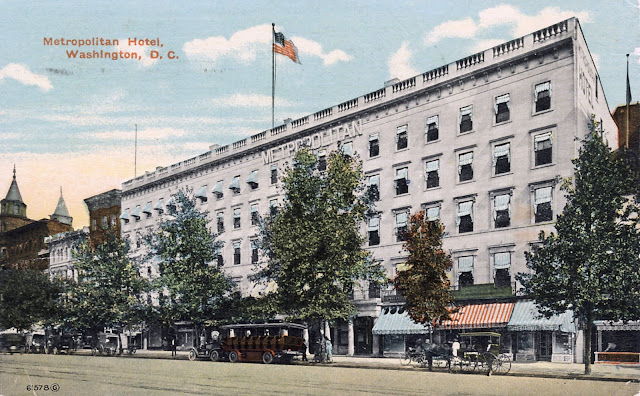 After Brown died in 1847, his two sons took over the hotel, and in 1850 they hired celebrated Philadelphia architect John Haviland (1792-1852), a major proponent of the Greek Revival style, to enlarge the structure to a full five stories and to add a grand, neoclassical façade made of white marble reportedly from the same quarry as had supplied the Capitol building. The beautiful, renovated building reopened as Brown's Marble Hotel in 1851. In 1865, the Brown family sold the hotel, and the new owners renamed it the Metropolitan, a moniker it would keep until it closed and was sold in 1932. The Washington Post remarked the following year that it "had been in continuous operation longer than any other hotel in America."


Most of the building was razed in 1935, but a small fragment, seen here, managed to survive up until the early 1980s, housing, among other businesses, Barney's Restaurant.

These last two forlorn window bays from the old marble hotel also are now gone. The various architectural odds and ends in the middle of this block were cleared away in 1984 to make room for the present 601 Pennsylvania Avenue, seen below, which was completed in 1985. Its design is intended to recall the look of the old Metropolitan.